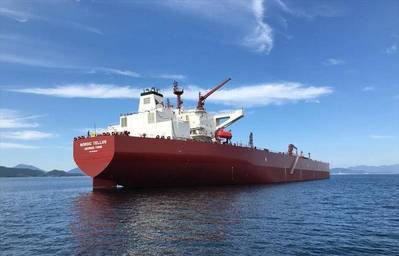 Nordic American Tankers said it has added two suezmax tankers to its fleet. The newbuilds, NAT's first delivered since 2018, both have long term contracts.

The 157,094 dwt Nordic Harrier was delivered on May 13 from Samsung shipyard in South Korea. The second vessel, to be named Nordic Hunter, is 156,800 dwt and will be delivered from Samsung within the next few days, NAT said. The ships were ordered in 2020.

Both tankers have six-year contracts with Oman's ASYAD Shipping Company. The time charters will generate an aggregate revenue of more than $100 million, New York-listed NAT said when it announced the deals in February.

The newbuilds are fully financed via Ocean Yield, a company controlled by Kohlberg Kravis Roberts (KKR), which is headquartered in the U.S. The financing is for up to 80% of the newbuilding price, and the agreements are based on a 10-year bareboat charter for each vessel. NAT has certain options to buy or sell the vessels during the charter period.