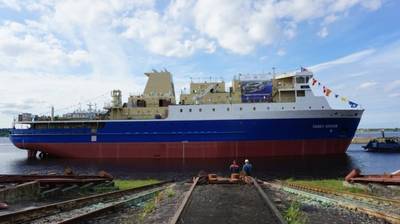 Russia's Nevsky Shipyard has launched the second and final cargo-passenger vessel as part of the PV22 project.

The newbuild Pavel Leonov, launched on August 6, is the second vessel in the series of two dry cargo-passenger vessel carriers ordered by Sakhalinlizingflot in August 2018. The series' lead vessel, Admiral Nevelskoy, was launched in May.

The 75-meter-long vessels are each designed to transport 146 passengers, general cargo, containers (including refrigerated) and cars between Sakhalin Island and the Kuril Islands and is equipped with a cargo crane with the ability to perform cargo operations on an unequipped shore. Designed by Marine Engineering Bureau-Design-SPb, each ship has a hold capacity is 895 cubic meters and is able to carry 24 containers, including eight refrigerated containers, and six passenger cars.

Construction is well progressed on a pair of 40-meter catamaran passenger ferries at AFAI Southern Shipyard, in the Peoples Republic of China…