New Crewing Mandate Could Be a 'Gut Punch' to U.S. Offshore Wind Projects 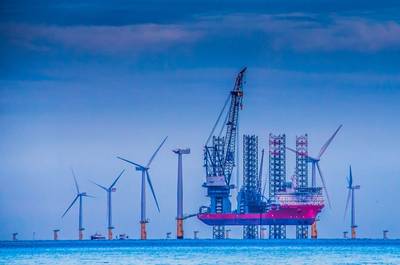 The U.S. House has this week passed the National Defense Authorization Act (NDAA), in which it attached a provision that would change rules for manning offshore vessels in U.S. waters, with the goal of fostering American jobs in the U.S. offshore wind sector, however, the move could be counterproductive.

According to American Clean Power (ACP), which has slammed the move, the U.S. Coast Guard Authorization Act contains a provision that requires, within 120 days, that the nationality of crews on specialized offshore international construction vessels match the flag of the vessel or be American mariners as a condition of working on the US Outer Continental Shelf.

Namely, it is thought that the move could negatively impact the country's ambitious plan of having 30GW of offshore wind installed by 2030, up from the current 42 megawatts simply because the U.S. offshore wind installation fleet does not exist yet, and there's not enough trained U.S. mariners.

ACP said: "Unfortunately, there are insufficient numbers of trained American mariners, as well as crew from the vessel’s flag state to man these ships. As a result, this provision would halt domestic offshore wind farm installations and thousands of jobs, including the overwhelming number of American mariner jobs associated with these projects."

Worth noting, the U.S. has a long-standing federal law called the Jones Act that regulates maritime commerce in the U.S. and requires goods shipped between U.S. ports to be transported on ships that are built, owned, and operated by U.S. citizens or permanent residents.

Given that neither Deme Offshore's nor Maersk Supply Service's offshore wind turbine installation vessels will be Jones Act-compliant, the solution was for their WTIV to never actually carry any goods between ports in the U.S. but to be fed wind turbines by the Jones Act-compliant feeder barges. Now, the crewing provision introduced in the U.S. Coast Guard Authorization Act could make things more complicated for these projects.

Offshore Engineer has reached out to Deme Offshore and Maersk Supply Service, seeking comment on the new situation.

According to a response by Maersk Supply Service spokesperson, the provision shouldn't be a problem.

Deme Offshore did not immediately respond.

Commenting on the U.S. Coast Guard Authorization Act provision, ACP CEO Heather Zichal said: "This provision is a gut punch to offshore wind projects, and it has nothing to do with making the Coast Guard any stronger. It doesn’t belong in the law. It certainly doesn’t belong in the NDAA. We knew that if this largely unvetted crewing provision becomes law, it will delay offshore wind development and stymie the nation’s goal of deploying 30 gigawatts of U.S. offshore wind by 2030. We can’t keep saying we support clean energy and clean energy jobs but then pass laws that undermine them.

Offshore wind can create up to 83,000 new American jobs, but today’s vote undermines that possibility by imposing vessel crewing requirements before there are enough domestic vessels available to do the work. It’s a matter of math, not ideology. Today, the U.S.-flagged specialized construction vessels simply do not exist. Today, there aren’t nearly enough U.S. mariners trained to operate them. Congress is imposing a provision that will only hurt American workers who won’t be able to build the offshore installations today and tomorrow – without any benefit.

"Let’s be clear. If we stay on track, coastal communities will benefit from clean and reliable energy, more local jobs, and growing supply chains. As these projects are built, all of the vessels going from U.S. ports to offshore turbines will be made in America and more than 80 percent of the crews on board will be American mariners. "

But if we allow this provision to veer us off track, long-term power offtake contracts and awards will all be put at risk – for nothing. We need Congress to replace this ill-conceived crewing mandate with policy incentives that actually build more U.S.-flagged vessels and train more American mariners. That’s how America wins," Zichal said.

Massachusetts's democratic congressman Jake Auchincloss, which voted against NDAA, has urged the Senate to remove the amendment.

He said: "Section 518 in H.R. 6865 would prohibit offshore wind developers in the U.S. from employing necessary construction vessels, including wind turbine installation vessels (WTIVs), because they are foreign flagged and staffed with a workforce that we currently do not have stateside.

"It is a misconstrued extension of the Jones Act. Custom and Border Protection’s (CBP) own interpretation of the Jones Act has determined that the law already requires the transportation of merchandise between offshore wind turbine foundations and U.S. ports to be done by American mariners on the U.S. flagged ships.

"Per CBP’s guidance, the use of foreign-flagged vessels, like WTIVs, for installation of materials, as long as the jack-up vessel stays stationary, is consistent with prior interpretations of the Jones Act."

He said that by barring the use of foreign-flagged offshore wind turbine installation vessels in the short term, "we sacrifice all of the jobs that would have existed during the lifetime of these projects, including for maintenance and operations."

Auchincloss said: "Ceasing construction at this early stage will jeopardize as many as 33 offshore wind projects along the East Coast and as many as 9,000 jobs at the Massachusetts Wind project and the Dominion Coastal Virginia Offshore Wind project alone.

"By not allowing offshore wind developers to employ necessary construction vessels, the U.S. risks losing the deployment of up to 1,460 MW of offshore wind each year. Each WTIV not in use along our coasts, due to this provision, would be 4.9 million tons of annual CO2 that is not eliminated," he added.

"We urge you to remove Section 518 in any iteration of the Fiscal Year 2023 Coast Guard Authorization bill and, per the Chairman’s commitment, to work with House and Senate colleagues to resolve the issue before advancing any final version of the bill," he said.