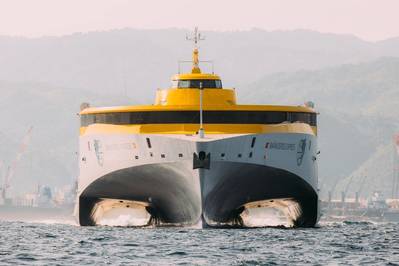 The Austal Auto Express 118 trimaran is the second and final vessel in a A$190 million series ordered by the Canary Islands operator in 2018. The first vessel, Bajamar Express was constructed by Austal Australia and delivered in July 2020. Capable of transporting 1,100 passengers and 276 cars at a cruising speed of over 37 knots, the new ferries feature class-leading interior amenities and facilities, including multiple bars, kiosks, a retail shop and children’s play area, the builder said.

Following the Bañaderos Express’ maiden voyage from the Philippines to the Canary Islands, the vessel will join Bajamar Express to offer a dedicated trimaran service on the route between Santa Cruz, Tenerife, and Agaete, Gran Canaria, from the fourth quarter of CY2021.

Murray said, “Bañaderos Express is a real milestone for Austal Philippines as it is the 20th vessel constructed here at the Balamban shipyard since we opened in 2012. In just 10 years our team have constructed 18 catamarans and two trimarans, including the two largest high-speed ferries ever built in the Philippines, for operators located around the world.

“This delivery of Bañaderos Express is even more significant, given the challenging COVID-19 environment in which we have operated over the past two years. Austal Philippines has successfully maintained productivity, while keeping our team safe during the pandemic.”

“Following the successful introduction of her sister ship, Bajamar Express, which was acknowledged by the Royal Institute of Naval Architects in the UK as one of 2020’s Significant Ships, we’re delighted to be adding this equally impressive, environmentally-friendly new ship to our schedule and look forward to welcoming passengers onboard very soon.”