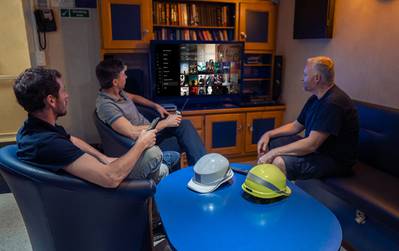 A new on-demand service for movies, news and information has been built and launched for mariners working on board the typical deep-sea merchant vessels.

While crew welfare in the form of modern IPTV entertainment is now part of the expected in some maritime segments, this is not the case in a typical tanker, bulk and container vessels, where the technology is often perceived as being too complicated and costly, says Norway-based BazePort.

The company is now launching a new service, BazePort Seea (yes, Seea with two e-s), which it says has been bespoke built to the requirements of deep-sea vessels demand. The service has been developed for both information and entertainment.

For vessel owners and operators who want a more modern and quicker way to communicate than the printed email on message boards, BazePort Seea allows for cloud publishing of text, pictures and videos, enabling crew to be updated on safety, training and general information.

Video-on-demand entertainment on BazePort Seea is like the Netflix experience, except it is offline and not dependent on using the vessel bandwidth. BazePort Seea includes thousands of hours of content from all major Hollywood studios, as well as some independent ones. Also, Baze works with news providers like BBC, CNN, Euronews and TV Patrol, and it also allows for RSS news and podcasts.

Seamen working at sea for months at the time are experiencing challenging times, and COVID-19 is only adding to the burden. For shipowners and managers, it is a challenge to create the best possible working and leisure time environment onboard their vessels. An entertainment system with an at-home user experience is a boost for the crew. The included set-top box allows the crew to socialize while watching a movie or the news together on the onboard TV set.