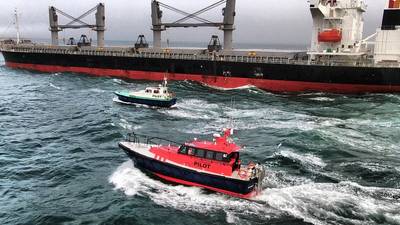 The Port of Waterford Company on the south coast of Ireland has taken delivery of a new pilot boat received by the crew at the Dunmore East pontoon.

The new vessel built by Safehaven Marine is a 15-meter interceptor which has been christened Port Láirge, a name of well known maritime heritage in Waterford. The previous namesake was a much-loved steam-powered dredger that served on the Suir for over 70 years until the 1980s.

Port of Waterford currently operates two pilot boats, one based in Dunmore East at the primary boarding position and one in Passage East. The new vessel replaces the Dun Mór, a purpose-built pilot boat designed and built by Halmatic in 1996. The new all-weather boat is self-righting and capable of recovering if capzsized by a large breaking wave, providing safer working conditions for pilotage personnel.

Port Láirge is powered by a pair of Scania D13 500hp engines, has an operational speed of over 25 knots and can carry five pilots and two crew in comfort. The new vessel offers a reduction in fuel emissions and is a more sustainable boat for the Port of Waterford.

Taking delivery of the new vessel Capt Darren Doyle, Harbormaster, Port of Waterford, said, “We along with the maritime community here in Waterford are delighted with the new addition to the fleet of port vessels.

“The work of the pilot crew is highly skilled and it requires a state-of-the-art vessel to ensure that this work can be carried out year-round in all weather conditions.

“Shipping companies are commissioning deeper vessels for larger cargo loads and therefore the requirement of a well-equipped vessel for our skilled Pilot crew is essential in order for them to be able to carry out the operational and navigational requirements to get these vessels in and out of port safely.”

Training on the new vessel will take place with the four-person pilot boat crew at the Port and the Port Láirge will officially enter service in the coming week as the Dun Mór is retired.

Piloting the new vessel on her maiden voyage to the pontoon at Dunmore East following the completion of her sea trials was boatbuilder Frank Kowalski MD of Safehaven Marine in Youghal.