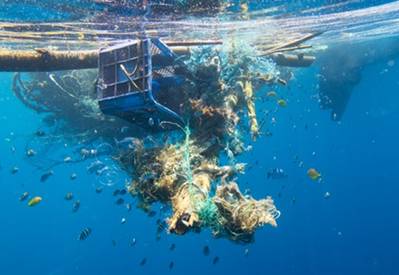 The sources and impact of sea-based marine litter form the focus of a new report by the Group of Experts on the Scientific Aspects of Marine Environmental Protection (GESAMP), an advisory body to the United Nations sponsored by 10 UN entities. The report outlines the various sources of marine litter and the impact and assesses the current availability of data and identifies knowledge gaps for the main categories of sea-based sources of marine plastic litter. The Working Group was established by GESAMP, on the request of IMO, Food and Agriculture Organization (FAO), and United Nations Environment Programme (UNEP).

The report stresses the urgent need to reduce marine litter. It outlines a number of ongoing initiatives and suggested steps to combat this issue, providing readers with practical information. It also highlights knowledge gaps and suggested areas for future academic and scientific research, including on the impact of COVID-19 on ocean industries and livelihoods that result in marine litter.

Although very little quantification of sea-based sources of marine litter exists in the scientific, peer-reviewed and grey literature (highlighted as an area for further research), the report looks at five main categories. These are:

Fishing: Abandoned, lost, or otherwise discarded fishing gear (ALDFG) from artisanal, commercial and recreational fishing operations is a large source of marine litter. It can include surrounding nets, seine nets, trawls, dredges, lift nets, falling gear, gillnets and entangling nets, ropes, traps, hooks and lines, floats and buoys, sinkers and anchors and miscellaneous gear including metallic materials. This gear can be lost regularly, episodically or catastrophically for a number of reasons ranging from inclement weather, ordinary wear and tear, wildlife interactions to natural occurring and human-made underwater obstructions. The impact of ALDFG includes economic losses, reduction of ability to target specific marine life, marine wildlife entanglement in and ingestion of marine litter, damage to marine habitats, impact on human habitats such as beaches and coastal areas and also loss of human life due to debris entanglement.

Shipping and Boating: Marine litter from merchant ships, cruise ships, yachts and leisure craft can take the form of solid waste, waste from cargo holds (e.g. wire straps, packaging materials, plastic sheets, boxes etc.), waste generated during the normal operations of the ships, personal litter from individuals onboard, debris from vessel wear and tear, and sewage (although this is regulated by IMO's MARPOL treaty, accidental discharges occur occasionally). Microplastics from shipping and boating are also highlighted in the report as are shipwrecks, lost containers and cargo. In addition to impacting marine life, affecting coastal areas and potentially damaging other ships, litter from shipping and boating can also damage coastal and ocean-based aquaculture. The report highlights that few detailed studies are available that quantify the amounts and types of marine litter from shipping, and that further work is needed to address knowledge gaps in terms of mapping and modelling of ship generated litter sources and distributions, microplastics in ship surface coatings, as well as socio economic impacts of marine plastic litter generated from this sector.

Dumping of waste and other matter at sea: this category includes dredged materials, which is by far the most significant in terms of volumes, and potentially the largest source of plastic or other litter from wastes dumped at sea. However, there is limited information on the quantities of plastics in the waste streams, despite efforts by the London Convention and London Protocol Parties, the treaties that regulate the prevention of pollution from dumping of wastes at sea. Therefore there is a need for a better understanding of the presence of plastics in wastes dumped at sea, both in terms of the characterization of the plastics present as well as the geographical distribution.

Other ocean uses: marine litter can occur as a result of offshore oil and gas exploration; shark and "stinger" nets set up in beach areas to prevent harm to humans; weather monitoring, which can create debris, such as weather balloon equipment including acidic batteries, plastic components and latex rubber; artificial reefs, which may be constructed out of waste materials such as old tyres, etc and may be impacted by tidal and weather conditions; scientific research equipment and activities; and fireworks.

The report concludes that sea-based activities do contribute to the global burden of marine litter, and that this does warrants concern. However, it is not possible to estimate the total contribute of sea-based sources and a concerted effort to updates global estimates is needed to fill these knowledge gaps, together with renewed efforts to reduce inputs of marine litter from all sources.

It is of note that this report does not examine the potential toxic effects of plastics on marine life, as this and other subjects are covered in detail in the reports produced by GESAMP Working Group 40 on Sources, Fate and Effects of Microplastics in the Marine Environment, see in particular its second report (GESAMP Reports and Studies No. 93, published in 2016.