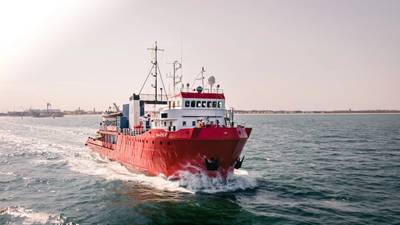 German rescue charity Sea-Eye said on Thursday it had asked Italy for a safe port to disembark some 800 migrants it rescued from boats in distress in the central Mediterranean.

The charity vessel SEA-EYE 4 Took onboard another 400 people from a wooden boat on Wednesday night in a seventh rescue operation since it set sail in mid-October, bringing the total to around 800, Sea-Eye said in a statement.

It said Rise Above, another rescue ship operated by NGO Mission Lifeline, reached the split-level wooden boat first, finding several migrants in the water without life jackets, at least one of whom had to be resuscitated in a lifeboat.

SEA-EYE 4 - a larger vessel - arrived shortly after and took all the migrants onboard.

"A state of emergency is now in effect on the SEA-EYE 4. Any delay by the authorities (on port access) endangers the health and lives of the rescued people and our crew," the Sea-Eye statement said.

"Sea-Eye has already asked the rescue coordination center in Rome for the assignment of a safe port and the German Foreign Office for urgent assistance...," it said.

"These people have to be rescued but it is enormously unfair that it should only be Italy (just) because it's the country of first landing in Europe," she said at the presentation of a protocol to help Afghan refugees.

The EU has tightened asylum rules and its external borders since more than a million refugees and migrants reached Europe across the Mediterranean six years ago, and it has cut deals with countries like Turkey and Libya for people to stay elsewhere along the global routes.

Sea-Eye said its ship was now heading to Italy's far southern island of Lampedusa as it awaits assignment to a safe port. Lampedusa is one of the main landing points for people trying to get into Europe from Africa.

So far this year, 53,836 migrants have arrived in Italy, according to interior ministry data, up from 29,267 in the same period last year.