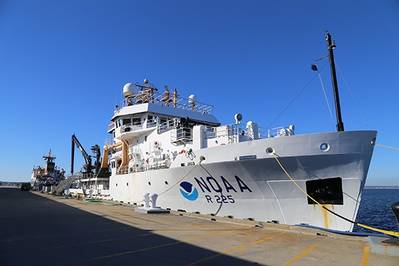 NOAA has awarded a lease to Massa Industries, LLC for office space in Middletown, R.I., that will temporarily house a new marine operations support facility for Rhode Island-based NOAA ships Henry B. Bigelow and Okeanos Explorer.

The Middletown facility will also support NOAA personnel engaged in the design and construction of a new pier for the two ships and a permanent NOAA marine operations support facility at Naval Station Newport. NOAA expects to occupy the interim facility in the fall of 2020 and relocate it to the naval station in 2023.

“With an expanded presence in Rhode Island, our highly skilled NOAA marine operations team and the ships they operate, manage and maintain will be better able to support NOAA and the nation,” said Rear Adm. Michael J. Silah, director of the NOAA Commissioned Officer Corps and NOAA Office of Marine and Aviation Operations. “This lease also solidifies our long-term commitment to the establishment of a marine operations support facility in Rhode Island.”

NOAA’s ship fleet is maintained and operated by a team of approximately 600 civilians and NOAA Corps officers. NOAA’s ships play a vital role in collecting environmental data essential to protecting lives and property, conserving and managing coastal and marine resources, and understanding weather and climate.