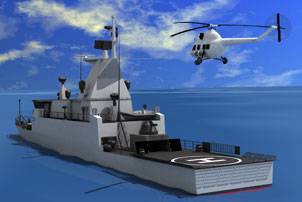 Nobiskrug has developed a new design for a Fast Attack Craft, the NOBIS-FAC60. The vessel is designed for easy operation, high performance, long endurance and cost efficient maintenance. A state-of-the-art combat system enables the NOBIS-FAC60 for anti-air- and anti-surface warfare. An ESM and a Decoy system provide the capability for self-defense. The vessel is designed for the operation in littoral waters for maritime border surveillance, anti-piracy and combat operations in military roles.

Nobiskrug is offering the vessel with a helicopter facility and an enhanced range as option. The Helicopter Option is fitted with a re-arranged aft deck for the safe landing of helicopters up to the size of a MI-2. In addition there is a little hangar for the permanent storage of a e.g. Schiebel Camcopter. The helicopter drone allows a permanent video surveillance of the environment. The Enhanced Range Option provides a maximum speed of 30 knots and an increased range to 3,000 nm at 13 knots. This enables a Navy to do long time operations along their coastline.