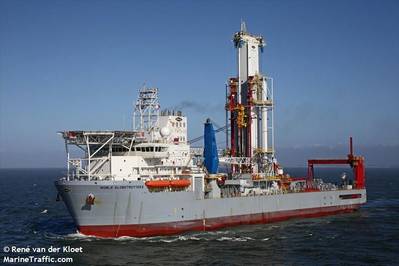 Offshore drilling contractor Noble Corporation has sent a force majeure notice to its client Shell over the Noble Globetrotter II drillship contract after the rig was damaged earlier this week in the U.S. Gulf of Mexico in severe weather during Hurricane Ida.

The 2013-built ultra-deepwater drillship has a contract with Shell lasting until early September 2023 at a flexible day rate of at least $275,000.

U.S. Coast Guard said Wednesday that the drillship, located 80 nautical miles south, southeast of Grand Isle, La., in the Gulf of Mexico, had sustained damage and that a plan was being developed to bring the vessel into port for repairs.

Around 140 crew members were on board when the storm hit, Reuters reported earlier this week, citing USCG petty officer Carlos Galarza said.

Noble Corp. said Thursday: "As previously reported, the vessel encountered severe weather during Hurricane Ida.  Noble management is in frequent communication with the ship's crew and is working to facilitate additional transport for some crew members to shore, as may be needed, as well as replacement personnel to support marine operations."

The company said that a small number of crew members on the 199 meters long ship were treated for minor injuries and that the vessel's living quarters continued to operate normally with food service, climate control, water, power, and internet systems functional. Reuters said Thursday that nine crew members were injured.

"The vessel's helideck is fully operational, and teams are working through logistical challenges across the Gulf Coast region to resume normal levels of transportation to and from shore," the company said Thursday. U.S. Coast Guard on Thursday shared photos of its helicopter aboard the rig, proving that the helideck is indeed operational.

Noble Corp. said that several riser joints and the lower marine riser package separated from the rig during the storm and sank to the seabed.

"Efforts are underway to locate and recover that equipment, and the company believes that, if necessary, it can replace any missing or damaged equipment promptly," the company added.

Additionally, Noble said that one of the drillship's cofferdams in the moonpool area sustained damage during the weather event.

"The damaged cofferdam does not compromise the stability or structural integrity of the rig nor the safety of personnel on board. The vessel successfully secured the well and detached from the blowout preventer in place on the well as part of its departure procedures," Noble Corp. said.

"Noble provided a force majeure notice to its customer in accordance with the governing drilling services contract. The contract does not contain a right of termination for force majeure," the drilling firm said.

"Noble has insurance coverage for property damage with a $10 million deductible," the driller said.

The U.S. Coast Guard had earlier this week said that the vessel's master had maintained that the drillship was not in distress and was not actively taking on water; however, the agency also cited social media posts claiming to be from Noble Globetrotter II crew members that had called attention to potential safety issues, including possible hull damage.

Noble did not address the hull damage claims in its latest statement, apart from saying that cofferdam damage did not compromise the stability or structural integrity of the rig.

Also, Noble Corporation had said Sunday that all workers aboard three of its drillships in the U.S. Gulf of Mexico - Pacific Sharav, Noble Globetrotter I, and Noble Globetrotter II - were safe and accounted for following Hurricane Ida, with only the Noble Globetrotter II experiencing hurricane-force conditions, but that the rig "maintained stability throughout the weather event and is operating on its own power with functional marine and safety systems."

In a separate statement on Thursday, Shell said that its U.S. Gulf of Mexico West Delta-143 (WD-143) offshore facilities had been damaged by Hurricane Ida.

The WD-143 offshore facilities serve as the transfer station for all production from Shell's assets in the Mars corridor in the Mississippi Canyon area of the Gulf of Mexico to onshore crude terminals. The WD-143 platform, owned by Shell Offshore Inc. (71.5%) and BP (28.5%), is operated by Shell Pipeline Company.

During the flyover, Shell said that it hadn't observed any visible structural damage to the rest of its offshore assets. Approximately 80% of Shell-operated production in the Gulf of Mexico remains offline.

In Louisiana, Reuters reported Wednesday that Shell would halt crew changes to and from its sites until a temporary heliport is established, as its crew-change heliport in Houma, Louisiana, sustained "significant damage" as a result of Hurricane Ida.

BSEE, the U.S. offshore safety regulator, said Thursday that 93.55 percent of oil production and 91.29 percent of the gas production in the Gulf of Mexico remained shut-in.