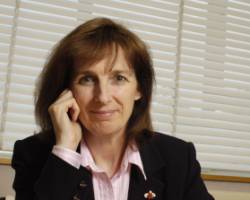 Following an open competition, the UKHO is delighted to announce the appointment of Sandra Rogers as our new Non-Executive Chair.

Sandra, who has been on the UKHO’s board for more than eight years having joined in July 2002, has been Interim Chair since October 2009 and she takes up her new position for an initial term of three years.

She is currently the Director for Inside Sales and Emerging Markets at Cisco and has been in the IT and Telecommunications industries for over 30 years having worked in senior positions for British Telecom, Dell and Hewlett Packard.

Sandra has led marketing teams nationally and internationally, been involved with global expansion, set up and run joint ventures and built up international sales operations.

This wealth of experience and her extensive knowledge of the UKHO will be vital to her role as Chair as the UKHO enters an important period in its future in the digital market and the continued expansion of e-Navigator.

Chief Executive Mike Robinson said: “I am delighted that Sandra has been re-appointed as Chair, maintaining Sandra’s knowledge within the organisation will prove valuable as we move into the era of digital navigation. I would like to wish Sandra continued success in her role as Chair of the UKHO”

Commenting on her appointment, Sandra Rogers said: “I am thrilled to have been given the opportunity to lead the UKHO Board. UKHO is a very exciting and successful organisation which is leading the industry through the change from paper to digital charting. I am very much looking forward to working with the MOD and the UKHO team and supporting them through the next stage of their journey”