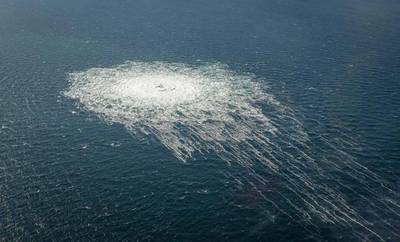 The gas leak at Nord Stream 2 in September seen from the Danish F-16 interceptor on Bornholm. Photo: Danish Defence

On the night of September 26, near the end of the calm season on the Baltic, a broiling kilometer-wide circle disturbed the face of the sea and a huge mass of methane erupted into the air. The gas formed a cloud that crossed Europe, in what’s considered the greatest single release of this potent greenhouse gas ever recorded.

It was caused by four breaches of Russia’s Nord Stream 1 and 2 gas pipelines, located in or near the territorial seas of Denmark and Sweden. Seismologists detected explosions at a depth of 70-90 meters on the seabed. These were not earthquakes.

Danish, Swedish and German authorities have reported that the explosions were a deliberate act, equivalent to the use of 500 kilograms of TNT.

The bubbling surface of the Baltic is a stark visual image of fossil fuel consumption changing the world’s climate. Methane has over 25 times the global warming effect of the equivalent amount of carbon dioxide, and is a crucial target for combating climate change.

It also highlights the vulnerability of undersea pipelines and undersea infrastructure in general, of which Australia has a significant network.

Wasted emissions
The explosions have had no direct economic or energy consequences. Nord Stream 1 stopped operating at the beginning of September following gradual supply reductions during the summer.

Nord Stream 2 was never launched as Germany refused to certify it following Russia’s invasion of Ukraine. Europe was not counting on the resumption of supplies from either pipeline.

While the pipelines were not transmitting gas, they contained methane gas to maintain pressure.

The amount of gas released is hard to quantify. Estimates suggest that roughly 300,000 tonnes of methane (or the equivalent of 7.5 million tonnes of carbon) has probably been released into the atmosphere, making it the largest release of methane in a single event (and over twice as large as the 2015 Aliso Canyon leak in California).

That tonnage represents around 10% of Germany’s annual methane output, or one third of Denmark’s total annual gas emissions, or the equivalent of the annual carbon emissions of one million cars. Nord Stream, however, is a wasted emission without either social benefit or productivity gains.

The leak is a reminder of the problem of “fugitive” methane, which comprises the leak, loss, escape and emission of gas from active or abandoned industrial sites.

While emissions from beef and rice production are the main culprits of fugitive emissions, oil and gas facilities also leak a significant amount of methane, as do activities such as fracking, coal mining and oil extraction. CSIRO estimates global oil and gas industries emit between 69 and 88 million tonnes of methane each year.

When we talk about data flows and digital commodities we are, in fact, referring to the transmission of communications through these undersea cables. The stability of the global economy and the wealth of multi-national corporations depend on the integrity of these cables and on the uninterrupted connectivity they provide.

Undersea pipelines delivering oil and gas from one country or state to another form the material basis of energy markets. Australia’s offshore energy pipelines include the 740km-long Tasmanian Gas Pipeline, 300km of which is sub-sea, as well as the Gorgon (140km), Scarborough (280km), Pluto (180km), Browse (400km), and numerous others.

Harnessing the potential of offshore wind (now one of the largest energy investments globally) is being realized in Australian projects such as Star of the South. Meanwhile, Sun Cable aims to supply renewable energy produced in Australia to Singapore via 4,200km subacqueous cable.

While speculative, such projects represent aspects of the green power revolution which will drive emissions reductions, and which are likely to become more common. Ensuring the resilience of these systems against malicious digital and physical threats is a priority.

System failures and hostile agents
The dependence of society and the economy on the reliability of this infrastructure is underappreciated.

The integration between cables and pipelines and the national and international markets they service is so tight, even the slightest disruption could inflict disproportionate economic damage.

These systems are so complex and closely integrated that their failures have consequences that traverse physical and national borders. This represents a significant challenge to ocean infrastructure governance.

System failure may occur because cables and pipelines are prone to accidental damage by ships’ anchors, trawl net fishing, and other undersea activities such as dredging. As the Nord Stream pipeline incident shows, they are also vulnerable to intentional hostile attack – both physical and cyber.

Hostile agents may exploit the fact that the sea is an opaque realm, one that’s difficult to operate in and defend. It, therefore, provides an effective shield against detection and subsequent prosecution.

Nord Stream was attacked in one of the busiest and the most surveilled seas in the world – the Baltic, in close proximity to the Danish military base of Bornholm Island. This clearly exposes the vulnerabilities of undersea infrastructure: it enables attackers to get close to targets undetected.

Cables and pipelines are governed by both national and international law. However, there are security gaps in international waters, where responsibility is ambiguously shared between corporations and government.

The lack of clarity gives companies little incentive to invest in security, or cooperate with government, increasing their vulnerability to attack.

The privatization of cables and pipelines has resulted in cost-effective practices being adopted to reduce operating costs. But this has been achieved by reducing maintenance and surveillance.

Undersea infrastructure will continue to be vital to world trade and social cohesion. The growing demand for bandwidth and the need for energy security makes cables and pipelines both more crucial and vulnerable. Nord Stream highlights the need for resilient systems to limit the risk of accidents, and has given greater impetus to transition from fossil to renewable energy.

Author
Claudio Bozzi is a Lecturer in Law, Deakin University