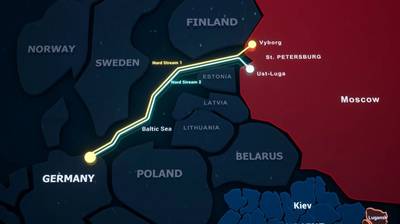 Russian Foreign Ministry spokeswoman Maria Zakharova said on Thursday that the future of the Nord Stream 1 gas pipeline to Germany would depend on gas demand in Europe and Western sanctions against Russia.

The pipeline from Russia to Germany is undergoing annual maintenance until July 21, but European governments are worried that Moscow could extend that in order to restrict European gas supply, disrupting plans to build up storage for winter.

Kremlin-controlled energy giant Gazprom said on Wednesday it could not guarantee the safe operation of a critical part of Nord Stream 1 because of doubt over the return of a turbine from Canada, which had imposed sanctions against the company.

Canada said at the weekend it had issued a permit to allow the return of the turbine for Nord Stream 1's Portovaya compressor station in Russia.

"As far as the gas pipeline's work in future is concerned, a lot will depend on our partners in terms of gas demand and illegitimate sanctions, as happened with the turbines in Canada," Zakharova said.

She said the maintenance on the pipeline had been agreed in advance with consumers.

Russia accuses the West of waging economic warfare against it in support of Ukraine, but has insisted it remains a reliable supplier of energy.

The West has accused Russia, a key exporter of oil and gas, of stepping up the use of energy as a geopolitical weapon since it sent its army into Ukraine on Feb. 24.