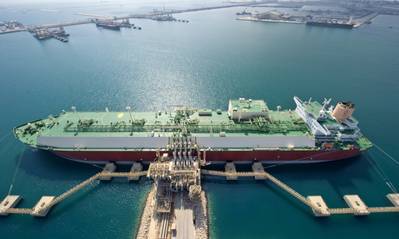 "These four carriers are the first batch of orders in Qatar Petroleum’s massive LNG shipbuilding program, which will cater for future LNG fleet requirements for the North Field expansion projects as well as for existing vessel replacement requirements. This order is also the first ever placed by Qatar Petroleum or any of its affiliates with a Chinese shipyard for LNG ships, and the first with Hudong in connection with the agreement to reserve ship construction capacity that was executed in April 2020," Qatar Petroleum said.

Saad Sherida Al-Kaabi, the Minister of State for Energy Affairs, the President and CEO of Qatar Petroleum, said: "We continue to push forward with our LNG expansion projects, and today’s announcement is yet another step in our journey. I am especially pleased with the signing of this order as it marks our first ever new LNG carrier to be built in the People’s Republic of China.”

His Excellency Minister Al-Kaabi added, “We are proud to contribute to the success story of the LNG ship construction industry in China. We are also confident in Hudong’s capabilities to execute this order, worth in excess of 2.8 billion Qatari Riyals [~$769 million] to the highest safety and technical standards and to deliver top quality LNG carriers that will facilitate continued safe and reliable delivery of LNG to the world.”

According to Qatar Petroleum, its LNG carrier fleet program is the largest of its kind in the history of the LNG industry and will play a pivotal role in meeting the shipping requirements of Qatar Petroleum’s local and international LNG projects, as well as replacing some of Qatar's existing LNG fleet.