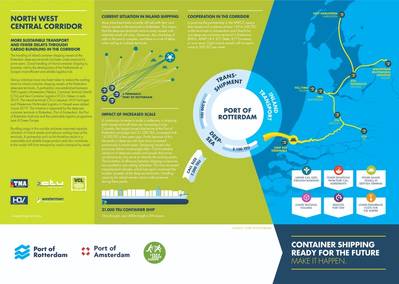 The new partnership of deep-sea terminals, inland terminals and inland shipping companies on the Amsterdam-Utrecht-Rotterdam route was established in February 2019.

The number of inland terminals connected to the North West Central Corridor has increased in three months from five to eight terminals, resulting in a total shipment volume of 6,500 TEU per week. This adds approximately 100,000 TEU on top of the 250,000 TEU that is currently shipped via this trade route. Freight volume originating from Harlingen, Hasselt and Lelystad is transhipped in Amsterdam to inland vessels on the North West Central Corridor.

Bundling of cargo, fixed port call agreements with larger freight volumes (150 to 200 containers per call) and fixed point-to-point connections between inland terminals and deep-sea terminals result in a reliable inland shipping product with fewer handling delays at the terminals.

The vessels in the North West Central Corridor have achieved a reliability of over 95% since the beginning of February. And with HOV Harlingen joining the corridor, a diesel-electric inland vessel has been added to the pool of corridor vessels. This vessel’s CO2 emissions are around a quarter lower than that of modern, conventionally-powered inland vessels.

The design of the North West Central Corridor is comparable with the West Brabant Corridor (Tilburg-Oosterhout-Moerdijk-Rotterdam), where positive results are now being achieved with freight bundling, fixed port call agreements and point-to-point connections.

“The establishment of this corridor means that we can expect significant improvements in our performance as well as offering our clients something to which they are entitled: a reliable, affordable CO2-saving transport alternative”, stated Tim van der Roest, General Manager Barge & Terminal at Westerman Multimodal Logistics.

The port authorities of Rotterdam and Amsterdam are delighted with the expansion of this initiative. “It’s a fantastic development that demonstrates the added value of cooperation”, explained Rob Smit, Hinterland Manager at the Port of Amsterdam.

“By bundling capacity, knowledge and cargo, the parties are making a real difference, resulting in an improved logistics product that also makes transport by water more attractive”, stated Smit.

Emile Hoogsteden, Director of Containers, Breakbulk & Logistics at the Port of Rotterdam Authority: “The North West Central Corridor is in line with the cargo transport corridor programme approach, in which the Ministry of Infrastructure & Water Management, provinces, port authorities, Top Sector Logistics and business community collaborate on so-called ‘Top Corridors’.”