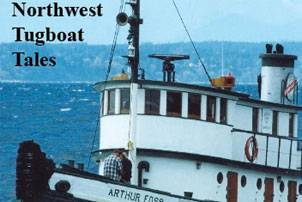 Until now there have not been many songs about West Coast tugboats, but the release of a new CD, “Northwest Tugboat Tales,” helps correct this gap.  This CD contains seventeen songs that tell the stories of tugboats from Alaska down to California, with a focus on Washington and British Columbia.  Most of the songs are based on true incidents, and all reflect the dramatic lives of the hard-working men and women who operate West Coast tugboats, whose stories are seldom heard by the public.  Some of the Northwest’s best folk musicians lent their talents to this collection, bringing a wide range of musical styles, from Celtic to Calypso, from vigorous to gentle, from tragic to humorous.  The CD is available for purchase at www.maritimefolknet.org, where you can also listen to samples from each song.

A CD Release Party for “Northwest Tugboat Tales” will be held on Sunday, Aug 29, from 3:00-5:00 pm, aboard the historic tugboat Arthur Foss at the Historic Ships Wharf in Lake Union Park, 860 Terry Ave N, Seattle, WA 98109.  The public is invited to meet some of the musicians and hear some of the songs performed live.  There will be free snacks and beverages, and a chance to tour the historic Arthur Foss.

“Northwest Tugboat Tales” is the first project of a new organization, Maritime Folknet, which was formed to encourage the intangible aspects of maritime heritage: music, stories, and art.  A few good songs about Northwest tugboats had already been recorded, but generally maritime music has tended to focus on the Age of Sail.  Says Maritime Folknet President Alice Winship, “Seafaring changes, but the sea remains the same.  The ships of today, and the men and women who work them, are just as deserving of song as the old-time shellbacks.”

Songwriter Mary Garvey searched the Northwest for new tugboat songs and encouraged others to be written, including several that she wrote herself.  Only five of the recordings have been previously released on other CDs; the rest are new.  According to Chris Glanister, the CD’s producer, “Soon Mary was digging up songs and artists from the most obscure places.  Gradually my studio filled with musicians and my hard drive with songs from up and down the West Coast.”