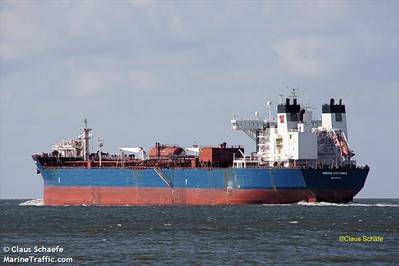 In recent years, courts in Europe using tougher regulations have fined shipping companies for transporting hazardous waste for disposal in cases that have added to complexities for seaborne transporters often operating in several jurisdictions.

"Teekay Shipping Norway AS is suspected of illegal export of waste, in the form of the shuttle tanker Navion Britannia. The ship sailed from Norway in 2018, and reached Alang, India in July 2018," Dahl told Reuters in an emailed statement.

"The investigation will focus on whether the export was in violation of Norwegian and EU regulations of waste export."

Bermuda headquartered Teekay Offshore confirmed in a statement that the vessel was part of their fleet and their office had been raided.

The company said the vessel had been sent to an Indian yard in 2018 for recycling in full compliance with the requirements and standards of the Hong Kong convention.

"As a responsible operator, we are open and transparent about our practices and have nothing to hide," Teekay Offshore said. "We have followed all rules and regulations in the related export and recycling processes."

The Hong Kong convention lays down requirements for the safe and environmentally friendly recycling of ships and the disposal of hazardous materials.

Okokrim's Dahl said Norwegian police had not yet reached a conclusion over whether the vessel must be considered as waste before sailing from Norway.

"In our experience, the scope of the investigation of Teekay Shipping Norway AS will necessitate months rather than weeks of investigation before we will be able to conclude on whether to charge or acquit the company," Dahl said.

The majority of the world's ageing ships are broken up on beaches in Bangladesh, Pakistan and India.

Campaigners have said that in many yards workers still cut up ships with little more than their hands and blowtorches, with parts and pollutants dropping directly onto the sand. They say they have continued concerns over safety at the sites.