Princess and Norwegian Cruising Into Port of Houston 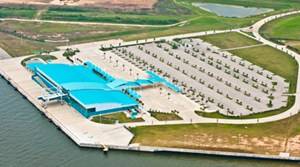 Princess Cruises will make passenger cruise calls during the 2013-2014 cruise season, while Norwegian Cruise Lines has committed to begin service in 2014.

"We are ecstatic that these two premier cruise lines have chosen to sail from our state-of-the-art cruise facility at Bayport in Pasadena, Texas," said Jim Edmonds, chairman of the Port Commission of the Port of Houston Authority. "Securing this cruise business helps fulfill our commitment by building the cruise terminal to spur job creation and economic development for the entire greater Houston and Pasadena region."

The Port Commission authorized entering into agreements with both lines after meeting in executive session during a regular meeting today. Discussions with the companies have been under way for some time.

The Port Authority's agreement with the lines is significant. It is projected that the cruise activity will have a considerable positive impact on the economy of Harris County and the greater Houston area, including the cities of Houston and Pasadena. Smaller cities near the cruise terminal are also expected to benefit.

Activity from a single cruise line is expected to generate annual economic impact of $50 million, according to the firm Martin Associates, including local purchases of $3.6 million. A total of 222 jobs will be touched, including the creation of almost 100 new jobs. An estimated $941,000 annually in state and local taxes is anticipated. The combined impact of the agreements with the two cruise lines over the next four years will be approximately $200 million.

Princess Cruises' new service is scheduled to begin in November of 2013 with a  total of 27 departures planned for the season.

Princess Cruises' inaugural cruise is an unprecedented sailing aboard the Caribbean Princess to support U.S. veterans. The historic cruise, which will sail between Nov. 5 and Nov. 9, is expected to raise $1 million for two U.S. veterans' organizations, the Vietnam Veterans Memorial Fund (VVMF) and Operation Homefront. Princess will begin marketing the new Houston-based cruises aboard the 3,080-passenger Caribbean Princess immediately.

Norwegian Cruise Lines and the Port Authority reached an agreement covering three years for Norwegian to sail from the cruise terminal beginning in 2014, with a total of 75 calls. The agreement includes an option to extend for up to two years.

The Bayport Cruise Terminal, which was fully completed in 2011, is located in Pasadena, Texas, which is outside of Houston.