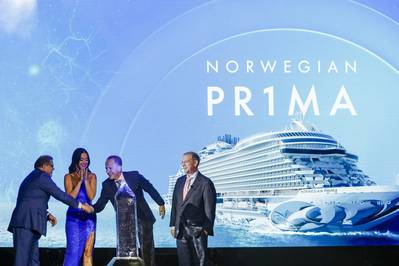 Built by Italian shipbuilding group Fincantieri, the newbuild is 965 feet (294 meters) long and more than 143,535 tons with capacity for 3,100 guests at double occupancy.

The first of six in NCL's Prima Class, Norwegian Prima, along with its sister-ships, will form the backbone of the future NCL fleet. Deliveries are scheduled through 2027.

Norwegian Prima will depart on inaugural voyages to Northern Europe from the Netherlands, Denmark and England beginning September 3, 2022, before making her way to the U.S. She will then sail voyages to the Caribbean from New York City, Galveston, Texas, and Miami in October and November before settling into her homeport of Port Canaveral, Fla., and Galveston, Texas for the 2023 and 2024 cruise season.