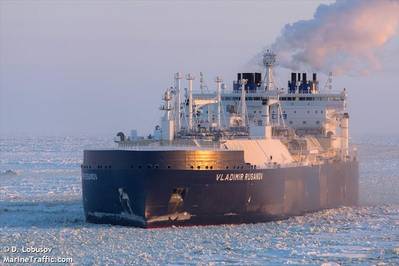 Russian oil and gas company Novatek has said it has shipped the first cargo of liquefied natural gas (“LNG”) from its Yamal LNG project to Japan transported eastbound via the Northern Sea Route.

The LNG cargo was delivered by the 299 meters long ice-breaking LNG tanker “Vladimir Rusanov” under a spot contract and unloaded at the Ohgishima LNG Terminal in Japan.

Novatek, the largest independent natural gas producer in Russia, said that this LNG cargo was its first successful experience of entering and unloading an Arc 7 ice-class LNG tanker in a Japanese port, which allows the company to increase the volume of LNG supplies to Japan.

“We focus a significant amount of attention to develop and enhance the logistical scheme for our LNG projects,” noted Lev Feodosyev, NOVATEK’s First Deputy Chairman of the Management Board.

“The future launch of a transshipment terminal in Kamchatka will significantly expand our opportunities to cost competitively deliver and supply LNG to the entire Asia-Pacific region.”