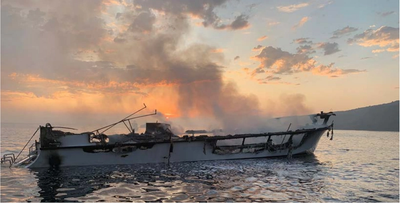 Photo of Conception’s burned hull at dawn on September 2, 2019, prior to sinking. (Credit: Ventura County Fire Department via NTSB)

A U.S. safety board on Tuesday called for new safeguards for small passenger vessels following a September 2019 early morning boat fire in California that killed 34 people.

The 75-foot (23-m) recreational diving vessel, Conception, with 33 passengers and six crew aboard, was anchored off Santa Cruz Island when it caught fire. All 33 passengers and one crew member died of smoke inhalation because they were trapped in the berthing area while a fire burned above.

The National Transportation Safety Board (NTSB) urged all vessels with overnight accommodations to be required to have interconnected smoke detectors in all passenger areas and secondary means of escape that lead into a different space from the primary exit.

The board also called on the U.S. Coast Guard to establish an inspection program to verify that roving patrols are conducted as required.

The Coast Guard said in a statement it would "carefully consider" the NTSB recommendations "through a deliberate process, which will include review by all subject matter experts and senior leaders responsible for implementing the potential regulatory changes."

The absence of a required roving patrol on the Conception likely delayed the initial detection of the fire and directly led to the high number of fatalities, the NTSB found.

"Our new recommendations will make these vessels safer, but there is no rule change that can replace human vigilance," NTSB Chairman Robert Sumwalt said.

The NTSB determined the probable cause of the fire and subsequent sinking was the failure of Truth Aquatics, the owner and operator, to provide effective oversight of its vessel and crew operations.

A lawyer for the owner of the Conception did not immediately respond to a request for comment.

The U.S. Attorney's Office has an active criminal investigation of the accident and the NTSB said prosecutors asked it not to interview the captain "out of concern that the interview could hinder the ability of their office to bring criminal charges against the captain."

The NTSB said a contributing factor was the lack of a Coast Guard regulatory requirement for smoke detection in all accommodation spaces.