Nuclear Cargo Ship to Be Decommissioned in Scotland 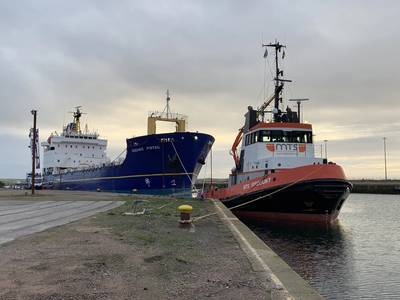 A long-serving nuclear cargo vessel has made its final voyage and will be decommissioned in Scotland.

Earlier this month, Oceanic Pintail set sail from Barrow-in-Furness, in Cumbria, for the final time, and now 98% of the 3,865-tonne vessel will be recycled by Leith firm Dales Marine Services, an EU List approved supplier of vessel decommissioning.

Oceanic Pintail, operated by International Nuclear Services (INS), was launched in 1987 and has served the U.K. nuclear industry for the last 33 years.

Peter Buchan, Operations Director for INS, said, “Oceanic Pintail has served the nuclear industry and the U.K. with distinction. With a fantastic safety record since she first sailed in 1987, Pintail has been involved in some incredibly important projects, including being the first vessel to ship MOX fuel from Europe to Japan in 1999 and the recently completed Dounreay Exotics Consolidation Program.

“It was crucial to us that the winning bidder was able to [decommission the vessel] so in safe and environmentally-friendly way. We set out rigorous standards, which had to be met, including a target that 98% of the vessel being recycled,” Buchan said.

Michael Milne, Dales Marine Managing Director, said: "Dales has been providing decommissioning services for several years and after my trip to see the vessel, I knew that our expertise and decommissioning capabilities were the ideal fit for this work.”

The vessel arrived in Dales Marine’s dry dock facilities earlier this month, after a 1,000-nautical-mile tow, and Dales said it will be commencing with the decommissioning operation in due course.

“I am delighted Pintail will remain in the U.K., as Scottish firm Dales Marine Services was the successful applicant. Everyone who has sailed on Pintail will miss her,” Buchan said.

INS said it commitment to ensuring 98% of Pintail is recycled is part of a major focus for the Nuclear Decommissioning Authority, which this year has set a priority to identify ways to reduce and map the industry’s carbon footprint.

David Peattie, Chief Executive of the NDA and Chairman of PNTL, who has sailed on Pintail during one of its nuclear transfers, said, “Oceanic Pintail has given the nuclear industry many years of great service and with an unwavering safety record throughout. Seeking to recycle 98% of this vessel will see her playing an important part in our commitment to reducing our carbon footprint and is a fitting final mission.”

Pintail has been a fixture in the waters off Barrow-in-Furness since arriving in the U.K. from Japan in 1987. It has been the flagship vessel in U.K.’s nuclear fleet and offered customers across the world a bespoke solution to their specialist transport challenges. With a track record of safely carrying MOX and high-level radioactive waste, Pintail was available for the most complex of nuclear transport projects.

PNTL Captain Aidan Howlett was on board the PNTL vessel Pacific Grebe as it passed Pintail being towed to Leith. It was a poignant moment for him having been 3rd Officer on board the vessel during its maiden voyage in 1987, and Master on its final cargo voyage to Nordenham, Germany, in September 2019.

“All crew mustered on deck to witness Pintail passing by, and we sounded our whistle to recognize the distinguished service the vessel has given to PNTL and the UK over the last 33 years,” Howlett said said.

Pintail is an INF3-class vessel – the highest level of the International Maritime Organization’s (IMO) code which regulates shipments by sea of packaged irradiated nuclear fuel, plutonium and high-level radioactive wastes.

INS still runs PNTL’s fleet of specialist nuclear vessels – Pacifics Grebe, Egret and Heron – with shipments now back under way for the first time since the World Health Organization (WHO )declared the COVID-19 outbreak a pandemic earlier this year.