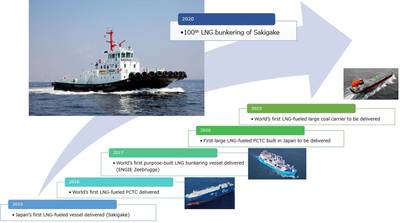 Japan's first LNG-fueled vessel, the tugboat Sakigake, on January 23 was supplied with LNG as fuel for the 100th time since the tugboat’s delivery in 2015.

The LNG bunkering was conducted safely and efficiently from a tank truck at the No. 5 quay of Shinko, Yokohama, said a press release from the Tokyo-headquartered global logistics enterprise.

"NYK is making use of the expertise and know-how the company has obtained through LNG transportation over the years to expand its wide range of businesses to LNG-fuel supply and sale. The company is thus making a proactive effort to shift to LNG-fueled vessels as one solution to environmental concerns," said a press release.

"NYK will continue its efforts to reduce the company’s environmental load and contribute to the realization of a sustainable society, it added.

"The NYK Group is dedicated to achieving the SDGs through the group’s business activities and its medium-term management plan “Staying Ahead 2022 with Digitalization and Green,” and this low carbonization of marine fuel is one of the group’s initiatives," said the release.