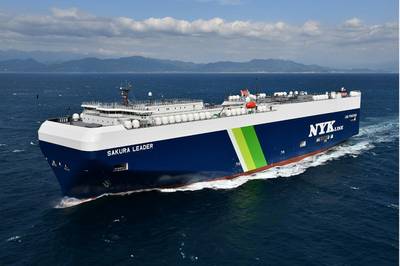 NYK signed a memorandum of understanding (MoU) for the consecutive building of LNG-fueled PCTCs at Shin Kurushima Dockyard Co., Ltd. and Nihon Shipyard Co., Ltd. Twelve new ships are planned to be built, six ships each at the two shipyards, for delivery successively from fiscal 2025 to fiscal 2028.

The dozen ship is in accordance with the PCTC fleet replacement plan to achieve NYK’s environment management target, which is to reduce CO2 emissions per ton-kilometer of transport by 50% by 2050. The use of LNG fuel, in addition to hull modification to improve fuel economy, will contribute to a reduction of CO2 emissions by approximately 40% compared to ships using conventional heavy fuel oil.

Through its “Sail GREEN” project, NYK’s Automotive Transportation Headquarters has been promoting the transition of upcoming newly built PCTCs to vessels that are LNG-fueled, and this began with Sakura Leader, which was delivered in October 2020 and was the first LNG-fueled PCTC to be built in Japan.

The company already has firm plans to launch eight LNG-fueled PCTCs by 2024. Including these additional 12 new vessels, NYK’s total number of LNG-fueled PCTCs will increase to 20 by fiscal 2028 through a total investment of about $1.8 billion.

Looking to the future, NYK aims to advance to zero-emission vessels using marine fuels such as hydrogen and ammonia, starting around 2030. At the moment, NYK is positioning LNG fuel as a bridge solution until future zero emission ships can be realized.