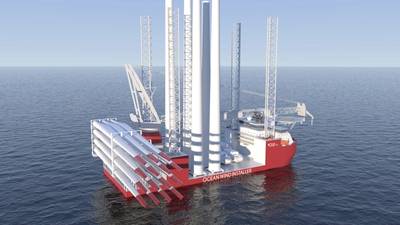 Ocean Installer, a Norwegian company mostly known for its offshore oil and gas services provider, is increasingly turning towards the offshore wind industry.

Following a recent establishment of an offshore wind branch, and the naming of a director to lead it, Ocean Installer on Monday announced it would enter into a partnership with shipbuilder Vard - a Fincantieri company - "to develop one of the world's most advanced turbine installation vessels for offshore wind."

Erik Haakonsholm, General Manager of Vard Group Offshore & Specialized Vessels said: “We will jointly be developing one of the world's most advanced vessels for installation of future offshore wind turbines, which are too large for the existing turbine installation fleet."

"By being able to install wind turbine components above 1000 tonnes more than 150 meters above sea level, this ship is expected to be highly attractive for the construction of big international wind farms in the coming years.”

Odd Strømsnes, CEO of Ocean Installer said: "This all-Norwegian collaboration between subsea contractor Ocean Installer and the Vard shipyards builds on experience, quality standards and efficiency developed over years of work on the Norwegian Continental Shelf.”

“On the basis of Norwegian advanced ship design and construction capabilities, as well as experience from complex subsea projects, we’re now ready to take a piece of the growing global market for installation of offshore wind turbines,” the two companies said, adding: “Energy companies in Norway are winning large international tenders for offshore wind farm construction, so it is natural for us to get into the game.”

The companies did not share the details on the terms of the cooperation, nor on the expected delivery date of the vessel.

According to Strømsnes, Ocean Installer has already prequalified for certain large offshore wind projects and is participating in tenders in the USA and Europe for both Norwegian and international energy companies.

"Such change of direction is very important for traditional Norwegian oil and gas supply chain, which long term will have to replace its existing business with something else,” he says.

"We currently have high expertise and solid revenues from oil and gas, and these resources are now dedicated to establishing us as a leading player within the offshore wind space.”

To lead this initiative, Ocean Installer has recruited several key people from the sector. These include Even Larsen, former CEO of Fred Olsen Ocean, and Olav Hetland, former Senior Vice President for offshore wind power at Statkraft.

While Norway doesn't have any offshore wind farms installed yet, several Norwegian offshore oil and gas services providers see the opportunity in diversifying its offering and diving into the growing offshore wind market.

Among them is the offshore oil drilling contractor Odfjell Drilling, which last week announced its entry into the floating wind farms space. Read more here.