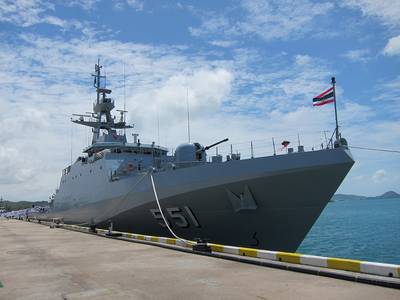 The Royal Thai Navy has become the latest navy to take delivery of an offshore patrol vessel designed by BAE Systems.

HTMS Krabi was constructed by Bangkok Dock through a technology transfer agreement with BAE Systems, which supports Thailand’s national policy of self-sufficiency by growing its own sustainable shipbuilding capability.

Her formal handover marked the completion of the first ship to be constructed at Mahidol Adulyadej Naval Dockyard and was attended by members of the Thai Royal Family. Employees from BAE Systems who have been supporting the construction also joined the celebration.

The 90-meter vessel is based on the design of the U.K. Royal Navy’s well proven River Class vessels and is similar to the three ocean patrol vessels that BAE Systems recently delivered to the Brazilian Navy.

The adaptable design can be altered to meet the operational requirements of each customer, making it ideally suited to the export market. HTMS KRABI has been modified to meet the requirements of the Royal Thai Navy to include a 76mm gun, locally sourced air-conditioning and electrical systems as well as fixtures and fittings that reflect Thailand’s cultural style.

The ship’s flexible design has enabled the installation of combat systems within HTMS KRABI that are compatible with the wider fleet. The use of locally sourced materials and equipment will also reduce in-service support costs during the more than 30 year life of the ship, in addition to benefiting Thailand’s economy.

HTMS KRABI exceeded expectations during sea trials involving test firings and helicopter operation. Her senior officers also visited the U.K. at the invitation of the Royal Navy Flag Officer Sea Training Organization where they spent time aboard HMS Severn, a River Class vessel, and the Brazilian Navy’s third Amazonas Class vessel to further understand the strengths of the design and to observe how the Royal Navy trains crews for duty aboard an Offshore Patrol Vessel.