Offshore Spend to Rebound after 2009-10 Lows 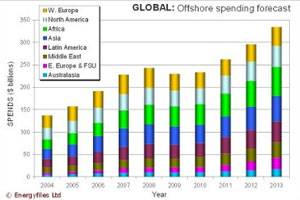 These headline forecasts appear in the new, fully updated edition of the “World Offshore Oil & Gas Production and Spend Forecast 2009-2013” published by Douglas-Westwood and Energyfiles. With the offshore sector responsible for both the highest cost and highest technology element of spending in the oil and gas industry, the report delivers a comprehensive quantitative analysis of offshore oil & gas production and gives a detailed forecast of global spending.

Sourced from data in the “Energyfiles Global Databases,” the report shows that in 2008 offshore oil production was nearly 10b barrels (bbls) or 34% of total production, whilst offshore gas production had risen to nearly 6b bbls in oil equivalent terms, equaling 29% of all gas production (they stood at 9b bbls and under 4b bbls equivalent respectively back in the year 2000). Higher oil prices – which are double what they averaged five years ago – stimulated investment leading to equipment and personnel shortages as demand soared. Costs increased for most consumables and services, especially high technology services, more than ever in 2005 to 2007.

“But 2008 saw the beginnings of financial turmoil,” noted report author Dr. Michael R. Smith of Energyfiles. “High prices and economic decline reduced energy demand. Global oil demand, standing at around 85mm bbls per day in 2007, declined in 2008 and will decline even further in 2009 – the first time this has happened for two consecutive years since 1983. Oil prices had risen at unprecedented rates from a low of $13 per bbl (for Brent in 1998), to an average of $85 per bbl in 2008. But the average figures show only part of the picture. The spot price for Brent crude spiked at $143.95 on the July 3 2008 and had tumbled back to $36 by the end of the year.

“The price volatility immediately led to uncertainty and project delays so that in 2009 we have a period of across-the-board cost deflation. Global upstream oil and gas budgets for 2009 have reportedly been cut by 21% with more than 20 planned large projects being postponed. On the other hand the biggest oil companies only planned, on average, to cut spending by 5%.”

The report examines these cut-backs, projecting them to be short-lived. Continued steady increases in oil and gas production, after the declines of 2009, will, after 2010, once again drive all industry offshore annual expenditure up from over $240b in 2008 to nearly $340b in 2013.

“Last year I commented that to attain such growth the industry will have to look and spend in every far-flung part of the world” reflects Dr Smith. “Nothing has changed that view and new deep and very deepwater project approvals in Angola, India and China for example are a testament to this. But different economic circumstances and an unparalleled volatility in price and fiscal conditions, allied to continuing political uncertainty in many of the world’s major producing regions, as well as the increased impact of new environmental strategies – in both developed and undeveloped countries – has made the assessment of project risk even more tricky.

“Historically, global economic recessions have led to declining energy demand,” said Dr. Smith, “but the resultant lower prices have soon led to a recovery in demand and then prices, especially as OPEC has acted to rein in output to tighten supply. Thus in early 2009 the supply/demand balance for oil had already stabilised, despite the worsening recession. Our analysis points to stability within the offshore industry in 2010, whilst in 2011 a return to growth is forecast. Many more challenging and expensive projects must be brought onstream – and most of the high technology sectors of the offshore industry remain equipment and people resource-constrained.”