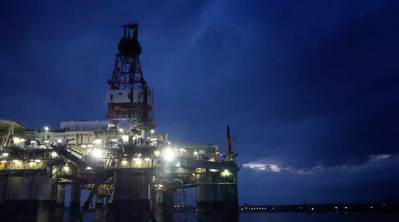 The company's shares reversed course and were down 2.3 percent at $16.67, with investors shrugging off a beat on quarterly profit and revenue.
Global benchmark Brent crude prices have stabilized after a more than two-year slump, with prices hovering around $55 per barrel.
"Offshore drilling is cyclical in nature, and despite some stabilization in the price of oil we have yet to see a floor in the declining demand of deepwater assets," Edwards said on a post-earnings call with analysts.
"I think (a recovery in demand) is more than likely to be pushed out into 2019 or 2020."
Barclays analysts said last week they expected the offshore floating rig count to bottom at year-end and start to inflect in 2018. Evercore analysts said they expected the offshore downturn to break later this year.
Offshore projects, which take years to develop and are capital intensive, were the hardest hit by the slump in crude prices as oil and gas producers slashed spending.
However, the benefits of the recent recovery in crude prices have largely eluded offshore operators as oil and gas companies prefer to deploy capital in their onshore projects.
Diamond Offshore said it executed a new contract for the Ocean Monarch rig with BHP Billiton in Australia. The contract is scheduled to start at the end of the second quarter and run through late third-quarter of 2017.
Diamond Offshore, majority owned by Loews Corp, said total revenue fell 29.5 percent to $391.9 million, but beat analysts' average estimate of $358.3 million.
Contract drilling revenue rose 13.3 percent to $384.6 million from the third quarter. Evercore ISI had estimated revenue for the business of $356.1 million.
Diamond Offshore's adjusted profit of 27 cents per share beat analysts' average estimate of 13 cents, according to Thomson Reuters I/B/E/S.
The big beat was powered by the Houston-based company's cost cuts, with total operating expenses plunging nearly 68 percent in the three months ended Dec. 31.
However, the company does not anticipate material changes to its base cost trends in the coming quarters, Chief Financial Officer Kelly Youngblood said on the call.
The company's shares had fallen 9.50 percent in the past 12 months, through Friday's close.
(Reporting by Vishaka George and Arathy S Nair; Editing by Sriraj Kalluvila)