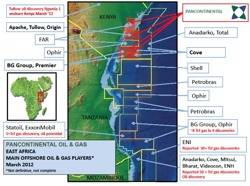 Apache is anticipating a spud date within Q3 2012, with the actual date depending on when the drilling rig is finished with its current operations. The well is expected to take some 45 to 60 days to complete to a planned total depth of 3,250m subsea in water depth of 860m, easily within the range of modern equipment.

Pancontinental estimates that Mbawa has maximum potential to contain 4.9 Billion Barrels of oil in place at the main Tertiary / Cretaceous level with significant additional potential also to be tested by the well at the deeper Upper Jurassic level and shallower Tertiary levels. Only drilling is capable of verifying the oil and gas volumetric potential (if any) of the Mbawa Prospect.

Pancontinental has four projects offshore Kenya covering more than 18,000 square kilometres in licence areas L6, L8, L10A and L10B, with the L8 / Mbawa project being the most advanced and Mbawa being the first prospect to be drilled.

Apache Corporation, the parent company of Apache exploration and production company with operations in the United States, Canada, Egypt, the United Kingdom, Australia and Argentina. Apache Corporation is widely regarded in the petroleum industry as one of the most successful, safe and efficient offshore operators.

A number of recent farmins and corporate takeovers highlight the growing value that the oil and gas industry attributes to the potential of offshore Kenya.