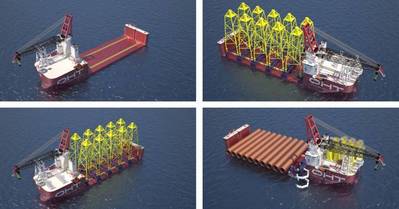 The loan was accepted by OHT's ship owing company OHT Alfa Lift AS, which is building the offshore wind foundation installation vessel Alfa Lift in China.

OHT ordered the Alfa Lift on speculation in 2018, and has since secured contracts to install foundations at the world's largest wind farm - the Dogger Bank in the UK.

Sharing further details on the loan, OHT said Tuesday: "The [loan] facility is for the post-delivery financing of the company’s wind foundation installation vessel Alfa Lift. The facility is to be drawn upon delivery of the mentioned vessel,"

The loan has a five-year term and a 12-year repayment profile.

DNB Bank ASA is Bookrunner and Coordinator, and together with Sparebank 1 SR-Bank ASA mandated lead arranger. Further, the Norwegian Export Credit Agencies GIEK and Eksportkreditt are supporting the facility, and their tranche is estimated to USD 82,600,000.

The Alfa Lift was recently floated out from its drydock at China Merchants Heavy Industry (CMHI) shipyard in Jiangsu, China.

The semisubmersible heavy installation vessel, which is designed and built for installing the next generation XXL offshore wind foundations, was launched on February 28, 2021.

The 51,087-deadweight-tonne vessel will be moored while work continues on the steel and internal fit-out, including the mechanical completion of systems.
The Ulstein-designed Alfa Lift will feature a 3,000-tonne main crane, a 10,000+ square meter "smart deck", capable of carrying and installing up to 14 XL monopiles or 12 jackets per voyage and will be able to fully submerge the main deck to a depth of 14.66 meters. The ship will have the capacity to carry cargoes of up to 48,500 tonnes.