Oil Platform Worker Medevaced in the Gulf of Mexico 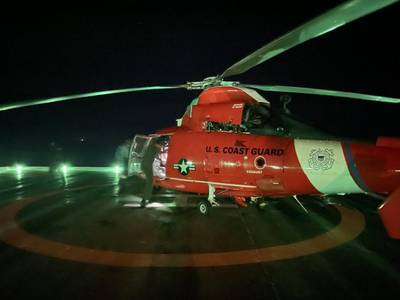 The Coast Guard said its watchstanders at Sector/Air Station Corpus Christi received a call at 10:20 p.m. Wednesday from personnel on ExxonMobil's Hoover-Diana oil platform stating a a 54-year-old crew member was experiencing a cardiac event. Watchstanders consulted with the duty flight surgeon, who recommended a medevac.

An HC-144 Ocean Sentry airplane crew from Sector/Air Station Corpus Christi and an MH-65 Dolphin helicopter crew from Coast Guard Air Station Houston launched to assist. The Dolphin crew arrived on scene, landed on the oil rig and brought the patient aboard. The crew transferred him to the University of Texas Medical Branch at Galveston in stable condition.