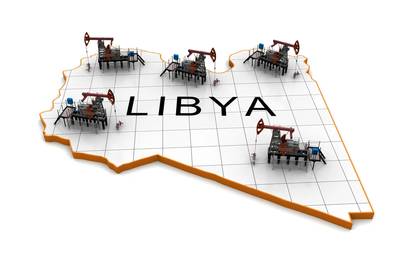 Libyan oil production could face protracted disruption as factions in the east seek to seize control of crude exports, adding pressure to a tight global market.

Eastern factions have tried to take over oil exports in the past but have struggled to find buyers because Western nations insist they will deal only with the internationally recognised National Oil Corporation (NOC) based in the Libyan capital of Tripoli.
But this has not stopped eastern forces from seeking control of the ports, accusing Libya's western-based government of failing to share revenues fairly.
The latest tussle for power has already cut national production to about 600,000 to 700,000 barrels per day (bpd) after it had been running earlier this year at 1 million bpd -- still well below the 1.6 million bpd output before a 2011 uprising plunged Libya into chaos.
The damage to Libyan oil production started with the latest series of battles over Ras Lanuf and Es Sider ports, which have been closed for two weeks, causing losses of about 450,000 bpd.
On Thursday a parallel NOC in the eastern city of Benghazi started blocking tankers booked by the Tripoli-based NOC from loading at Zueitina and Hariga. The other port under eastern control is Brega.
The NOC in Tripoli said on Friday that it expects to declare force majeure at Zueitina and Hariga on July 1, bringing total losses to 800,000 bpd, or $60 million in daily revenue.
NOC Tripoli Chairman Mustafa Sanalla, writing in the Financial Times on Thursday, called the latest crisis "by far the most dangerous" of the challenges facing Libya's oil industry since the 2011 uprising.
Combined exports from the five ports now under eastern control had been about 780,000 bpd in May, analytics firm Vortexa said.
"We took delivery of the ports and we have authority over them now," the head of the parallel NOC in Benghazi, Faraj Said, told Reuters, adding that orders had been issued to prevent the entry of any tanker that was not following its instructions.
PAINFUL LOSS
The oil market -- already under pressure from falling Venezuelan and Angolan output, as well as worries about a squeeze on Iranian supplies as U.S. sanctions bite -- remains tight even after OPEC and its allies agreed to ease their production curbs.
"Any lost barrel from Libya will be very painful," said Commerzbank analyst Carsten Fritsch. "It could not have come at a more inconvenient time."
The Organization of the Petroleum Exporting Countries, Russia and its allies agreed last week to return to 100 percent compliance with cuts that have been in place since January 2017, instead of exceeding those curbs.
But that brings its own pressure to the market. Output increases will mostly be met by OPEC's de facto leader Saudi Arabia and Russia, which erodes the buffer of spare capacity that can relieve unexpected supply disruptions.
Libya's output had tumbled as low as 200,000 bpd in mid-2016 before last year's recovery to about 1 million bpd.
The turnaround was made possible in September 2016 when the Libyan National Army (LNA), led by eastern-based commander Khalifa Haftar, took over blockaded oil ports including Ras Lanuf and Es Sider, and allowed NOC in Tripoli to reopen them.
But eastern factions reversed that policy in June, accusing the central bank in Tripoli of paying salaries to the LNA's opponents and giving insufficient funds to the east. Eastern officials have said they would send revenues to a parallel central bank based in the eastern town of Bayda.
Yet those revenues may not flow easily. France's Total , which this year bought a 16.3 percent stake in the Waha Oil Company that exports through Es Sider, said it would only deal with NOC in Tripoli, in line U.N., U.S. and European demands.
"Total is bound by international and Libyan laws, including United Nations Security Council resolutions which demand that Libya's oil facilities and exports remain under the exclusive control of NOC," it said, referring to the company in Tripoli.
The United States, the European Union and individual European states have repeated statements demanding that NOC in Tripoli has sole control, though diplomats said the Western warnings were delayed as efforts were made to reverse the move by eastern forces to put Benghazi's NOC in charge.
(Additional reporting by Ayman al-Warfalli in Benghazi and Ron Bousso in London Editing by Edmund Blair and David Goodman)