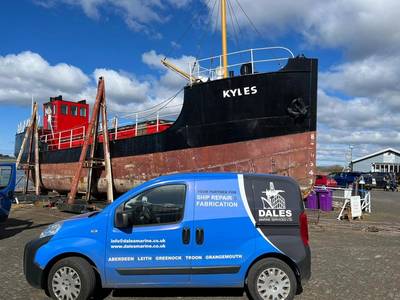 After a program of vital welding work, the Scottish Maritime Museum is on track to complete essential repairs to what is believed to be the oldest floating Clyde-built ship in time for the vessel’s 150th anniversary this Summer.

The Scottish Maritime Museum raised £40,000 for much-needed repairs to the 1872 MV Kyles, one of Britain’s most important historic vessels and a rare and nationally important survivor from a key period in Glasgow shipbuilding, through a Keep the Kyles Afloat Crowdfunder campaign last year.

The Museum’s technical team, curators and volunteers began work on the 122 tonne cargo coaster, which is part of the UK’s National Historic Fleet and older than the Falls of Clyde, tall ship Glenlee and the Sir Walter Scott, last year.

Together, they repainted MV Kyles inside and out and restored the cabins to how they would have looked when it was a working vessel.

The latest phase of repairs, the welding of seams and plates on the iron hull, was completed by Dales Marine Services.

The newly welded hull will be painted next month. The final phase of repairs, the servicing of the engine, will be carried out when MV Kyles returns to Irvine Estuary this Summer.

David Mann, Director of the Scottish Maritime Museum, said, “We’re delighted to work with Dales Marine Services on this vital welding work which will help ensure that MV Kyles remains part of Scotland’s living maritime heritage for decades to come.

“We look forward to celebrating MV Kyles’ 150th anniversary this Summer by returning this nationally important and newly shipshape historic vessel back to the water and re-opening it to the public.

“Once again, our heartfelt thanks go to everyone who donated and made these essential repairs possible.”

MV Kyles is a rare and nationally important survivor from the 19th century, a transformational period on the River Clyde when shipyards embraced the possibilities of steam power to become one of the most important shipbuilding centres in the world.

Built by John Fullerton & Co. at Paisley in 1872, MV Kyles served as a tender for the Clyde fishing fleet up until 1881.

After that, 23 further owners adapted the vessel for different uses across the UK.

Unusually retaining the same name despite so many owners, MV Kyles went on to become a cargo coaster, sand dredger and even a sludge tanker before being retired to the Scottish Maritime Museum in 1984.

Donors coming forward to support the conservation work on MV Kyles included Mr John Paul DeJoria of Texas. Mr DeJoria is one of the signatories on Bill and Melinda Gates ‘Giving Pledge’ committing billionaires to give the majority of their wealth to philanthropy.

The Scottish Maritime Museum’s national maritime heritage and art collections are housed in the Linthouse, a former shipbuilding shed relocated from Govan, and on the Harbourside, in Irvine.

The Museum has a second collection on what was formerly the site of the famous Victorian William Denny and Brothers Shipyard in Dumbarton.