OP/ED: The Jones Act is Worth Fighting For

By Congressman John Garamendi, Chairman of the Readiness Subcommittee within the House Armed Services Committee. April 25, 2019 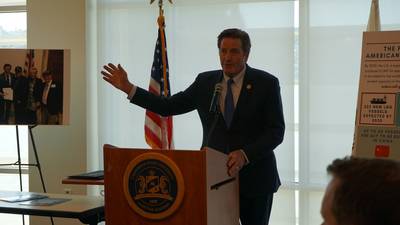 The President says he wants to make American great again, so why is he trying to destroy the principal support system for America’s maritime industry?

This week, we learned that President Trump is “seriously considering” issuing a broad waiver for the Jones Act, a critical law that requires domestic shipping in the U.S. to occur on ships that are built in the United States, fly the U.S. flag, and are operated by crews consisting of at least 75 percent American citizens.

I served as the top Democrat on the House Subcommittee of Coast Guard and Maritime Transportation for six years. Through that experience I gained a firsthand understanding of how vital the Jones Act is for our nation. Repealing it would prioritize foreign shipping interests over American workers while undermining America’s national security and economic development.

The Jones Act is the lifeblood for a U.S. maritime trade that supports 650,000 jobs and almost $100 billion in annual economic impact. If the Jones Act did not exist, the U.S. maritime industry would be sharply undercut by foreign shippers with lower labor protections, environmental requirements, and safety standards. Not only would we outsource marine transportation along our coasts and inland waterways to the cheapest foreign bidder, we would also hollow out a key component of American industrial might and eliminate jobs in American shipyards, which employ 110,000 people in 26 states.

But the Jones Act is not just essential for our economy—it remains essential for our national security and our war fighting capacity. Our military relies on privately-owned sealift capacity and highly trained merchant mariners to transport and sustain our armed forces during times of conflict. But the number of ocean-going U.S.-flag vessels has dropped from 249 in the 1980s to just 81 today.

As Chairman of the Readiness Subcommittee within the House Armed Services Committee, I’ve studied how important a robust domestic maritime sector is for military readiness. Our military has had to turn to foreign-flagged vessels for supplying our troops in times of war, and experience shows that can have dangerous consequences. In the 1991 Gulf War, our armed forces relied on 192 foreign-flagged ships to carry cargo to the war zone.

The foreign crews on thirteen vessels mutinied, forcing those ships to abandon their military mission. Would foreign flag carriers be any more reliable today, especially for a long-term deployment into active war zones?

Opponents of the Jones Act routinely claim that it is an outdated law that does more harm than good, but nothing could be further from the truth. Ninety-one U.N. member states comprising 80 percent of the world’s coastlines have cabotage laws protecting domestic maritime trade. Seafaring nations around the world understand the importance of their domestic maritime industries and have laws on the books to safeguard them.

Waiving the Jones Act would directly contradict the President’s purported goal of strengthening American industry. The Jones Act enjoys bipartisan support in Congress and throughout the nation. I urge the President to gain a proper understanding of how crucial the Jones Act is for our nation’s security and economic prosperity and abandon this misguided proposal. As we look to the future, if we want to keep the United States as a great maritime power, we would be wise to protect and expand this flexible, durable and valuable maritime policy.

Congressman John Garamendi represents California's 3rd district. He is Chairman of the Readiness Subcommittee within the House Armed Services Committee.