Ocean Osprey is Ready to Serve in Norway 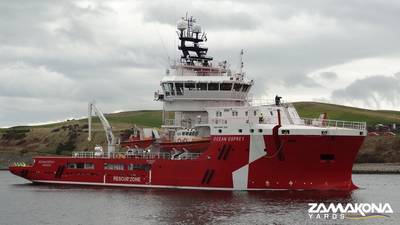 Ocean Osprey was launched January 31 at Zamakona’s facility in Pasajes (San Sebastián) and is the first ship ordered by the Norwegian shipping company Atlantic Offshore AS built by Zamakona Yards.

Atlantic Offshore’s second vessel, Ocean Marlin, a Havyard HY820 design, is expected to be ready by the end of June 2014.

Dutch shipbuilder Damen's new Fast Crew Supplier (FCS) 7011, which will be able to carry 122 people in a single trip, hit…