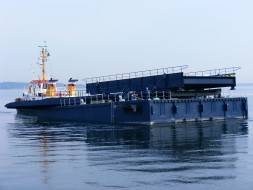 New RoRo facility for Berth No.1

The RoRo facility for Berth No. 1, which has been completely refurbished at ADM Kiel by Nobiskrug GmbH, was installed this morning. The pontoon-feeder for the ferry aft ramps weighing 1,800 tons was floated into position and moored.

Dr. Dirk Claus, Managing Director at  Seehafen Kiel GmbH & Co. KG, said, “The new RoRo device is another milestone in extending Kiel’s freight and logistic activities. From now on, cargo vessels can be loaded both via the ramp as well as by using two port cranes at Berth No. 1.”

The heart of the revamped RoRo facility is the buoyant pontoon of 1,800 tons, carrying the 32-meter-wide track installed on a steel deck for all kind of rolling cargo and serving as support surface for the aft ramps of the ferry vessels. A 23-meter-long and new bridge connects the pontoon with the quay wall in a flexible way so that loading and unloading the vessels is possible any time, no matter how the water levels might change. Dr. Claus said, “The new bridge can bear an axle load of up to 100 tons so that our options for handling heavy special cargo as well as mass general cargo have been extended significantly.”

The new RoRo-bridge is part of a project of about 5.4 million Euro which is subsidized by the state of Schleswig-Holstein with funds from the German Federation. The project also comprises the – already completed – adaption of the water depth at Berth No. 1 to a constant 10 m as well as a stronger fender system along the quay wall. The investment into the freight and logistic capacities is complemented by a warehouse that was taken into operation at the beginning of this month as well as a gantry crane for the rail terminal in Ostuferhafen. Dirk Claus: “The increasing traffic from and to Russia as well as the Baltic States requires more and more powerful port facilities. Our Ostuferhafen is absolutely meeting this demand.”

On the occasion of installing the new RoRo facility today, Mr Ralph Müller-Beck, State Secretary at the Schleswig-Holstein Ministry of Economic Affairs, Employment, Transport and Technology, caught up on the current development in Ostuferhafen. On a round tour of the Ostuferhafen, the State Secretary was also shown the new Scanning Gate and the usage of Yard IT, which are both contributing to increasing the area productivity on a sustainable basis. Dirk Claus: “Next to all these optimization measures, the next key point is the extension of Ostuferhafen by an adjacent commercial park.” At the moment, the project approval procedure is underway in order to integrate the area of 4 hectares into the port premises next year