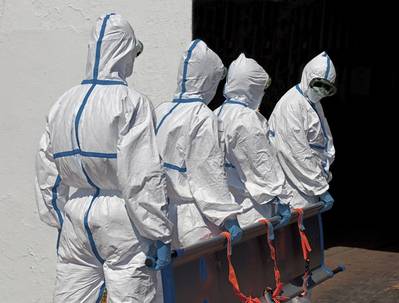 * Equities fall on confirmed case of Ebola in New York
* Economists see gloomy 2015 for China, euro zone - Reuters poll
* Commerzbank cuts price forecast on bearish OPEC signals (Updates prices, adds Middle East supply)
Brent crude fell below $86 a barrel on Friday on news of strong supply from Middle Eastern OPEC producers and as a confirmed case of Ebola in New York spooked global equities markets.
Iraq increased its oil supply in October, and Libya's production remained high, despite deep instability in both countries.
Brent crude for December fell $1.02 a barrel to a low of $85.81 and was trading around $85.90 by 1205 GMT. U.S. December crude fell 85 cents to $81.24 a barrel.
On Thursday Brent crude prices rose sharply on news of lower supply from Saudi Arabia, although overall Saudi production increased month-on-month and some barrels went into storage.
Analysts said on Friday that the market had overreacted on the up side, given the increase in production.
"If Saudi Arabia is releasing less oil into the market despite rising production, this indicates weaker demand," said Carsten Fritsch, an analyst at Commerzbank, in a note.
"This can scarcely be interpreted as an argument for rising oil prices."
Saudi Arabia, the world's top exporter, previously sent signals it is comfortable with markedly lower oil prices and willing to maintain high supply levels to compete for market share.
Tony Machacek, a broker at Jefferies in London, said, "I was surprised that the market reacted as violently as it did: there was no indication that the Saudis were trying to push the price up."
European equities and U.S. stock futures fell sharply on Friday on news that a doctor in New York City had been diagnosed with Ebola.
The doctor, who had worked in West African countries afflicted by the virus, was diagnosed after returning to New York.
Economists anticipate subdued growth in China and the euro zone next year, though signals from India are more positive, according to a Reuters poll released on Friday.
The gloomy outlook for two major oil-consuming markets has added to fears of slowing oil demand at a time of global oversupply.
Manufacturers in China and the euro zone performed better than expected, according to purchasing managers' surveys released on Thursday, but industrial growth in the United States fell to its slowest rate since July.
Commerzbank cut its average Brent price forecast for 2015 to $85 from $105 on signals that OPEC will defend market share rather than cut production to shore up prices.
"It is unlikely that OPEC will cut production sufficiently to remove the expected oversupply from the market next year," Fritsch in a note.
Standard Chartered and Citi both cut their Brent price forecasts on Tuesday.
The Organization of the Petroleum Exporting Countries will meet on Nov. 27 to review its output target for the first half of 2015. So far, only a minority of members have called for a cut.
(Additional reporting by Jane Xie in Singapore; Editing by Christopher Johnson and Jane Baird)

Repair to Oil Pipe that Shut U.S. Offshore Output Due by End of Day

Crews were expected to replace a damaged oil pipeline piece by the end of the day on Friday, a Louisiana port official said…