Palfinger Delivers Jetty Cranes for Borssele 1 and 2 OWF Base 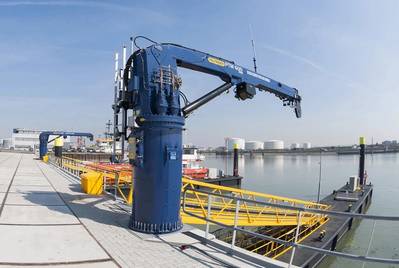 Crane specialist Palfinger has recently won an order to deliver two jetty cranes at the maintenance base in The Netherlands for Ørsted's new Borssele 1 and 2 offshore wind farms (OWF) in the Dutch North Sea.

While the wind farm is still under construction, the 2,100 sqm maintenance base in Vlissingen has already started operations, and Palfinger's cranes have now been installed.

"The installation of the two reliable PTM600 telescopic boom cranes is completed, and operations have recently started. From now on, the Palfinger cranes ensure safe, smooth and efficient material handling when loading and unloading cargo on and off Crew Transfer Vessels (CTVs). The cranes have a safe working load (SWL) of 2 tons and an outreach of 17.7 meters," Palfinger said Tuesday.

"We have been working with Ørsted for nearly ten years now. In the last two years, we already delivered four PF10000 fixed boom davit cranes for two Borssele offshore wind farm substations. With the two additional telescopic boom cranes, yet we were given another opportunity to foster our valuable partnership”, says Iavor Markov, Palfinger’s Contract and Tender Manager for marine and wind cranes.

He adds: “Our local service hub team based in Schiedam, the Netherlands, did a great job installing and commissioning both cranes under the extraordinary circumstances caused by the COVID-19 pandemic during April”.

The Borssele wind farm project is located 22 kilometers from the coast of the Dutch province Zeeland. With a capacity of 752 MW, 94 turbines are expected to generate renewable electricity equivalent to the consumption of one million households per year.

Ørsted and Belgium-based installation contractor DEME Offshore have earlier this month completed the installation of the 94 foundations at the Borssele 1&2 offshore wind farm location.

Ørsted in April said that Borssele 1 & 2 in the Dutch North Sea had delivered first power to the Dutch grid with the first turbine completed and supplying electricity.