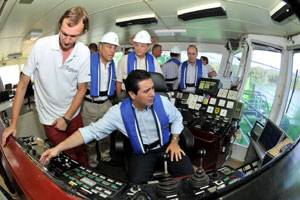 In April 2008, the ACP awarded Belgium-based Dredging International the $177.5 million contract to dredge the Pacific sea entrance, an essential component of the Canal’s Expansion Program that will provide enough draft and width for longer, wider ships to enter the new locks.

President Torrijos was on hand to initiate the work of Dredging International’s cutter suction dredge The Vlaanderen XIX. It will be used to remove approximately 1.5 million cubic meters of soft material on the northern most areas of the Pacific sea entrance. A stationary dredger which makes use of a cutter head to loosen the material to be dredged, The Vlaanderen XIX pumps the dredged material via a pipeline ashore to a designated site.


The ACP is the autonomous agency of the Government of Panama in charge of managing, operating and maintaining the Panama Canal. The ACP is governed by its organic law and the regulations approved by its Board of Directors.