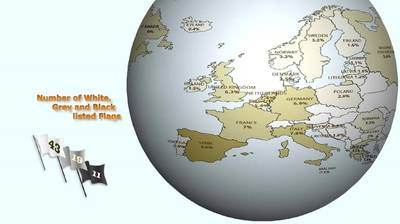 "These lists will take effect from 1 July 2019," said a release from the Paris Memorandum of Understanding (PMoU) on Port State Control (PSC).

The “White, Grey and Black (WGB) List” presents the full spectrum, from quality flags to flags with a poor performance that are considered high or very high risk. The list is based on the total number of inspections and detentions over a 3-year rolling period for flags with at least 30 inspections in that period.

The White List represents quality flags with a consistently low detention record. Compared to 2017, the number of flags on the White List has increased with one. Lithuania and the Russian Federation have entered the White list while Saudi Arabia has dropped to the Grey List.

Flags with an average performance are shown on the Grey List. Their appearance on this list may serve as an incentive to improve and move to the White List. At the same time flags at the lower end of the Grey List should be careful not to neglect control over their ships and risk ending up on the Black List next year.

On this year’s Grey List a total number of 18 flags is recorded. Last year the Grey List recorded 20 flags. New on the Grey List is the already mentioned flag of Saudi Arabia. Vanuatu has entered the Grey List from the Black List. Bulgaria has become a non-listed flag.

Compared with last year’s performance level, the level of RO performance is similar, with 4 ROs in the very low performing parts.

Details of the responsibility of Recognized Organizations for detainable deficiencies have been published since 1999. When one or more detainable deficiencies are attributed to a Recognized Organization in accordance with the Paris MoU criteria, it is recorded “RO responsible” and the RO is informed. Out of 566 detentions recorded in 2018, a number of 97 (17%) were considered RO related (14.3% in 2017).

As from 1 July 2019 the performance lists will be used for calculating the Ship Risk Profile. More information can be found in the 2018 Annual Report, which will be published in July 2019.