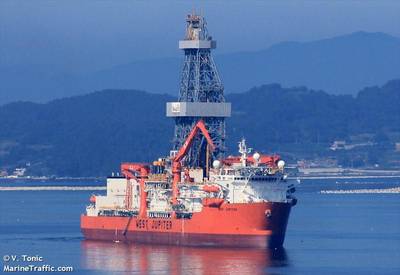 Offshore drilling company Seadrill Limited has secured a contract for the West Jupiter drillship with Brazil's Petrobras for work in the Búzios field offshore Brazil.

The contract is for a firm term of 1,040 days with the start-up slated for December 2022. The total contract value is about $264 million, including mobilization revenue and additional services.

Seadrill’s Chief Executive Officer, Stuart Jackson, said: “Petrobras is a long-standing and valued customer of Seadrill, and signing a third contract with them this quarter is testament to our strong partnership and commitment to the Brazilian market. Seadrill is focused on growing our fleet in strategic basins where we see high growth potential, such as Brazil, where we are now the largest international drilling contractor.”

The contract for the West Jupiter comes a little over a month after Seadrill said it had won two contracts with Petrobras for the West Carina and West Tellus drillship. The two rigs will work on the Búzios field, too.

Both contracts have been signed on a 3-year fixed-term basis, with an expected start in September 2022. The total contract value for the two contracts is approximately $549 million, including mobilization revenue and additional services.