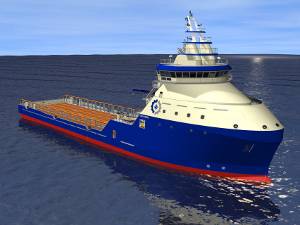 Naval Architecture firm Guido Perla & Associates, Inc. (GPA) signed a contract with the Brazilian Shipyard Detroit Brasil Ltda., a subsidiary of Detroit Chile, to deliver the Basic/Class Design and Detailed / Construction Engineering for four PSV 4500. Throughout the design and engineering process, GPA worked closely with the shipyard to meet all of Petrobras’ requirements for these vessels, which will be owned and operated by Brazilian-based Starnav.  During the construction process, GPA will also provide onsite supervision in Itajai, Brazil, at Detroit Brasil Ltda.   Construction for the first vessel commenced in early October 2010.

To fulfil Petrobras’ requirements for the 4500 PSV, GPA has developed a modern look vessel, the GPA 688SC PSV, with a special deckhouse arrangement.  This design has the capability to be transformed into the PSV 3000 (GPA 675 PSV), another vessel specified by Petrobras, by changing the midbody section. This characteristic is extremely valuable for the shipyard as it offers a high degree of flexibility and gives the opportunity to build in series
The GPA 688 SC PSV, measuring 90.00 meters in overall length, has a deadweight capacity of 4500 MT, thus the designation of the vessel.  The vessels will be outfitted with tanks capable of carrying oil-based mud (1,450 m³), water-based mud (590 m³), brine (1,494 m³) and dry bulk (340 m³).
The vessels will be optimally equipped for all conditions with a diesel-electric propulsion system, consisting of MTU engines, propulsors by Schottel and the Integrated Engine Control Room (ECR) by EPD.
Running on four MTU generators rated for 1,845 kW and one MTU emergency generator rated for 176 kW, GPA sees several benefits for the operator as these generators provide a powerful and compact, robust and quiet solution. They also offer the highest cost-effectiveness and profitability due to low consumption values, long maintenance intervals, and a low-maintenance engine design.
This propulsion configuration is optimized by combining it with two azimuthing drives combi drives rated for 2,500 kW and two tunnel thrusters rated for 900 kW delivered by SCHOTTEL.
The Engine Control Room (ECR) provided by EPD is a completely pre-tested, pre-manufactured container and designed as an integral art of the ship’s structure.  It allows for the equipment to be installed and tested in a controlled environment.  During construction, the ECR is simply lowered onto the vessel, secured and connected to power and control cables externally. This proven approach, first brought to market in 2009 on the GPA-designed Bourbon Liberties offshore vessel, greatly reduces the possibility of equipment damage while in shipyard.
The GPA 688 PSVs, providing accommodations for 30 crew members, will bear the class notation ABS, +DPS-2, +A1, Offshore Support Vessel, Circle E, +AMS and +ACCU.
“We are excited to soon see several vessels of our design operate for Petrobras, Latin America’s largest company and a world leader in the development of advanced technology from deep-water and ultra-deep water oil production.  Our goal at GPA, as it is with each vessel design, was to be compliant with Petrobras’ needs and requirements while offering a cost-competitive solution and we believe we have reached that goal.  Since entering the offshore industry almost 10 years ago, GPA has delivered vessel designs based on simplified hullforms and other construction methods, making each vessel more cost-effective without jeopardizing quality or performance. Almost 140 delivered vessels later, we continue to break into new markets with our designs and we are proud to be able to compete with much larger naval architecture and engineering firms worldwide,” says Paulina Alvarez, General Manager of GPA’s subsidiary in Santiago, Chile.
The vessels are under an 8-year contract for Petrobras and will be operating in the Campos Basin fields in Brasil.  Delivery for the first GPA 688 PSV is expected in October 2012 while the entire series is expected to be completed in October 2013.