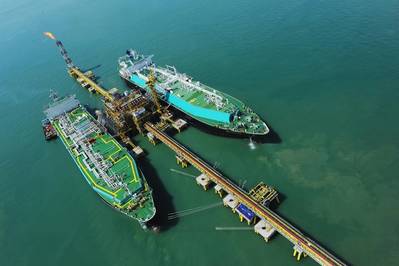 Malaysian oil company Petronas is looking to tap new markets to sell liquefied natural gas, including as fuel for ships, the head of its upstream operations told Reuters on Monday.
State-owned Petroliam Nasional Berhad, known as Petronas, also sees significant growth potential for LNG in India, Pakistan, Bangladesh and some parts of Southeast Asia, its upstream CEO Mohd Anuar Taib said.
"The key for us in the LNG business is to figure out a way to broaden and expand the customer base," Anuar said, adding that lower prices have opened up new markets that had previously been unable to afford LNG.
Asian spot LNG prices have dropped by more than 70 percent since 2014, with production growing faster than demand. Spot prices for June delivery stood at about $5.70 per million British thermal units (mmBtu) on Friday, compared with $20-plus in 2014.
Malaysia is the world's third-biggest LNG exporter behind Qatar and Australia. The top destinations for its LNG are Japan, South Korea and China, but Petronas is broadening its horizons and the first cargo from its floating LNG facility was shipped to India last month.
"We are making good inroads. We are working towards closing sales supply agreements with some of the countries around the region," Anuar said, adding that Petronas is also in preliminary talks with partners over the sale of LNG as shipping fuel.
Oil Price
Anuar said that Petronas is working on an oil price assumption of $45 to $55 a barrel for the next three to four years. Brent crude was trading at about $48 on Monday.
"We tend to plan in a more prudent manner," he said, adding that Petronas is not looking to increase capital expenditure. Global upstream capex is expected to be about 30 billion ringgit ($6.92 billion) a year, he said. In 2015 upstream capex was 48.7 billion ringgit, according to its last available annual report.
"(That) is quite sufficient for us for maintaining our production and also some growth," Anuar said of the capex forecast.
Like other oil majors, Petronas has taken a hit from lower crude prices. Benchmark Brent crude prices have more than halved since mid-2014.
Malaysia relies on its only Fortune 500 company for nearly a third of its oil and gas-related revenue.
Though reduced operating expenses helped Petronas to post a 12 percent rise in full-year net profit in March, the company gave a cautious outlook for 2017.
(By A. Ananthalakshmi and Emily Chow, Additional reporting by Florence Tan)