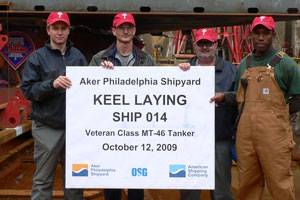 Two great teams - the 1,200-strong shipyard work force and the World Champion Philadelphia Phillies - were honored today at the keel-laying for the tenth tanker in the current build program at Aker Philadelphia Shipyard (Oslo: AKPS).

APSI officials decided to recognize the Phillies along with its talented workforce because both teams symbolize a dedication to precision and exemplary teamwork. Following ancient ship-building tradition, commemorative, good-luck coins representing the Phillies and the APSI workers were placed upon a keel block which supports the vessel during construction in the building dock before the first section of the ship was lowered into place.

The ceremony was conducted against a backdrop of Phillies banners and exuberant team spirit, and included representatives of APSI and OSG America. Members of the yard’s Prefabrication Department were featured in recognition of their outstanding performance and continuous improvement over the past year. Working as a close-knit team, they are credited with dramatically reducing the number of late and defective steel plates delivered to the yard, shortening of the schedule buffers both inter-departmentally and downstream in the production process, and a 44% reduction in recordable injuries year-to-date.

When completed, the 46,000 dwt tanker will be over 600 feet long and will be sold to American Shipping Company, who in turn will bareboat charter the vessel to OSG America for use in transporting petroleum products. The yard currently has three other product tankers under construction in the series of twelve, with delivery of the next vessel expected in the next several weeks.