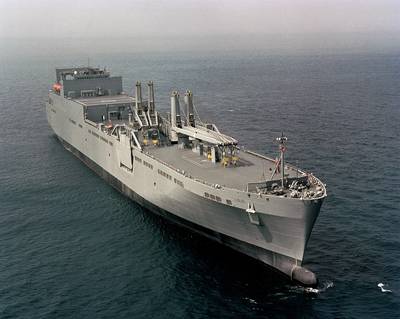 Philly Shipyard said it has been awarded a contract for the repair of the Watson-class vehicle cargo ship USNS Charlton (T-AKR-314). The repairs will be completed in the third quarter of 2021.

The USNS Charlton is one of Military Sealift Command’s (MSC) large, medium-speed, roll-on/roll-off ships. With a displacement of 69,000 tons and a length of 950 feet, the vessel carries prepositioned U.S. Army tanks, armored personnel carriers, tractor-trailers, and other equipment and supplies to potential areas of conflict around the world. It also provides surge sealift support of remote military actions.

The repair deal, awarded by ship manager Patriot Contract Services on behalf of the U.S. Navy’s MSC, is the third government repair contract that Philly Shipyard has won since the end of 2019.

Having delivered approximately half of all large oceangoing Jones Act commercial ships built since 2000, Philly Shipyard has been striving to secure more government projects amid fewer commercial shipbuilding opportunities. The yard is currently building up to five National Security Multi-Mission Vessels (NSMV) for the U.S. Department of Transportation’s Maritime Administration (MARAD).

"[The USNS Charlton repair contract] is another positive step in the company’s ambition to establish a mixed platform of ship maintenance, repair, and conversions, along with ship construction for the commercial and government new build markets," the company said in a statement.

“This is a great win for our shipyard and demonstrates our ability to acquire substantial repair jobs going forward,” said Steinar Nerbovik, Philly Shipyard’s President and CEO. “We look forward to working with Patriot as we continue on our journey as a strong partner for government projects.”