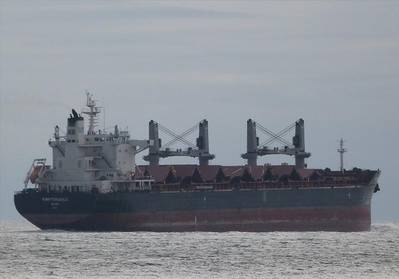 Eagle Bulk Shipping confirmed reports that one of its bulk carriers was hijacked in the Gulf of Guinea, and said the vessel and crew are safe now that the incident has been resolved.

Maritime security groups had reported that the Marshall Islands-flagged Rowayton Eagle was boarded by pirates off the coast of Nigeria, and AIS tracking suggests the vessel had been adrift since January 27.

"As you may have read in the press, the M/V Rowayton Eagle was hijacked about 240 miles southeast of Lagos (Nigeria). We are very pleased to report that the incident has been resolved and our crew are safe and unharmed, and the vessel is fully operational," Eagle Bulk wrote in a social media post on Monday. "Our profound thanks to Captain Gopich for his leadership and the professionalism and courage of the entire crew throughout this ordeal."

The pirates are understood to have left the vessel having failed to breach the citadel, according to maritime security risk management firm Dryad Global, who said the hijacking is the seventh offshore incident this year and the third recorded offshore boarding.

Bordering more than a dozen West African countries, the Gulf of Guinea is the world's top piracy hotspot. In 2020 pirates in the Gulf kidnapped 130 sailors in 22 incidents, accounting for all but five of those seized worldwide according to a recent International Maritime Bureau report.