Polarcus Nadia on the Move after Long Layup 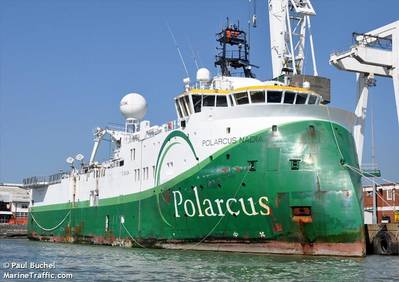 Polarcus' seismic vessel Polarcus Nadia is on the move, after more than five years in lay-up in the Netherlands, according to information released Friday by Dutch Marine Contractors.

The Polarcus Nadia, delivered in 2010, was cold stacked by Polarcus in early 2015 during the previous oil price downturn, in a move to cut operating costs, with little hope it would be reactivated soon.

The former CEO Rod Starr said at the time that it cost around $1.6 million per year to cold-stack the vessel, and, up to $40 million to reactivate it.

The Polarcus Nadia has been in layup ever since, with limited info on the vessel since the cold-stacking.

Dutch Marine Contractors on Friday said: "After a few years of layup, MV Polarcus Nadia departed this morning from Amsterdam to Norway. Towage was fixed by DMC and performed by tug NOORDSTROOM - thanks to Van Wijngaarden Marine Services and Polarcus."

Offshore Engineer has reached out to Polarcus seeking details on the future plans for the seismic vessel.

In the meantime, according to comments on social media, it seems the vessel is going to Norway for some more lay-up time, which does seem to make sense given the current dire situation in the seismic market, and high reactivation costs of a vessel that has been in lay-up for so long.

A Polarcus spokesperson has confirmed that the vessel is moving to Norway and that it will continue to be stacked.

The spokesperson said: "That’s correct, she will be moved to Lyngdal Norway to continue her stacking. Her new location will be inside a fjord and at a more cost-effective space."

The Equinor Board of Directors appointed Anders Opedal as its new president and CEO starting November 2, 2020. Eldar Sætre…