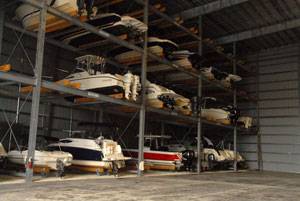 South Florida boaters have a new place to store their investments with the opening of Aquamarina Hidden Harbour in Pompano Beach. It’s the first newly constructed conventional dry storage marina in the region in more than a decade and the first in Broward County since a three-year moratorium on new commercial marina construction was lifted in 2007.

Aqua Marine Partners (AMP), a vertically integrated marina company based in Aventura, Florida, designed, developed, constructed and will manage the marine facility that cost $8m to construct. On Wednesday, June 4, 2009, the company held a grand opening event at which more than 400 boating enthusiasts came out to tour the facility.

Aquamarina Hidden Harbour is a full-service facility with 384 dry-stack slips designed to hold boats up to 43 feet in overall length inside its Category 4 Hurricane-rated facility, located at 2315 NE 15th Street in Pompano Beach, Florida (Broward County).

Aquamarina Hidden Harbour comes on-line at a critical time according to Andy Sturner, founder and CEO of Aqua Marine Partners. He noted that over the past decade, the amount of dock space in South Florida has severely dried up. A big reason for that is many marina owners sold out to residential developers during the recent real estate boom. Secondly, he cites the three-year moratorium on new commercial marina construction in Broward County that was put in place while Broward County crafted a detailed manatee protection plan.

“Even though the economy has struggled over the past year, there is still a strong need for a full-service quality marina that caters to the boating lifestyle,” said Sturner. “Our goal is to bring affordable luxury back to the South Florida boating experience. Toward that end, we have spared no expense in the design of this state-of-the-art marina. To complete the promise, we are offering special pricing on all our products.”

Aquamarina Hidden Harbour replaces another marina facility that had been torn down by its former owners, a corporation controlled by Huizenga Holdings. Aqua Marine Partners purchased the property in January 2008 and construction began less than three months after.