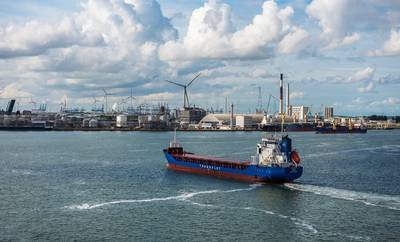 The Port of Antwerp recorded a year-on-year rise in the volume of cargo handled for the first seven months of 2021, even though disruptions caused by COVID-19 and Britain's departure from the European Union have depressed trade elsewhere, officials said.

Countries have tightened entry requirements in response to successive waves of the pandemic, leading ports to become backed up and preventing seafarers from changing over with colleagues onboard ships for many months.

But Antwerp, Europe's second-largest port, recorded a 5.2% rise in the overall volume of cargo handled, at 140.2 million tonnes, versus the same period to the end of July last year.

Its chief executive said it had bucked the trend in part because of forward planning ahead of Brexit and a planned merger with the port of Zeebrugge, scheduled for early 2022.

"What we are seeing since the first of January is a declining market in terms of volumes in both directions, especially coming from the UK towards Europe," Chief Executive Jacques Vandermeiren told Reuters.

"But this is not happening in Antwerp – we are seeing an increase in the volume and increasing liquid in containers especially coming from the United Kingdom."

The United Kingdom is the Port of Antwerp's third largest maritime trading partner with annual cargo flows of around 15 million tonnes.

Some 50% of those volumes are linked to liquid bulk, which is driven by the chemical industry, mainly from the United Kingdom to the port, which is Europe's biggest petrochemical cluster and No. 2 globally, the port said.

The port recorded growth in total throughput of 8% with the United Kingdom and 16.8% with Ireland in the first seven months of this year versus the same period in 2020.

The port's handling of conventional breakbulk, which includes industrial commodities, grew by 42.7% in the period versus 2020, boosted by an increase in throughput of iron and steel, as infrastructure spending has been spurred by stimulus packages to help economies recovery from the pandemic.